Why are You Not Getting a Fourth Stimulus Payment? Ask This Republican. 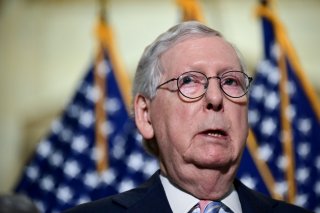 Here's What You Need to Remember: Even if Senate Majority Leader Chuck Schumer (D-NY) was able to corral the support of all House members and all fifty Senators, he would then be confronted by Republican opposition – for the Republicans remain overwhelmingly opposed to a fourth stimulus check – and the prospect of a Republican filibuster.

As the COVID-19 recovery continues, there are growing doubts about the need for a fourth stimulus check. More than two hundred million vaccine shots have been provided nationwide; all Americans are now eligible to receive them. Most states have ended or are in the process of ending their lockdowns and restrictions, and there has been a hiring boom in recent months as workers have emerged from seclusion to return to their jobs. These positive economic indicators have drawn into question the need for any further payments to “stimulate” the U.S. economy.

At the same time, however, signs have persisted that the economic recovery might be slowing down. The April jobs report indicated that only a fraction of the Dow Jones’s job estimate had been created. Vaccination rates are dropping, and a vocal minority of anti-vaccine activists has complicated U.S. efforts to achieve herd immunity. Estimates abound that most Americans have already spent their $1400 stimulus checks from March 2021 and that millions would be saved from poverty if a fourth check were issued.

It must be noted that there are substantial political obstacles to advancing a fourth stimulus check. First, while a vocal minority of Democrats have loudly supported proposals for further checks – including many on the party’s progressive wing, including Sen. Bernie Sanders (I-VT) and Rep. Alexandria Ocasio-Cortez (D-NY) – most Democrats have remained silent or opposed another payment. Particular attention has been paid to Sen. Joe Manchin (D-WV), the most conservative Democrat in the Senate. While Manchin has not made his position clear on a fourth stimulus check, observers have noted that he restricted the eligibility requirements for the third check, suggesting he would not be enthusiastic about a fourth.

This, however, is the least of the Democrats’ problems. Even if Senate Majority Leader Chuck Schumer (D-NY) was able to corral the support of all House members and all fifty Senators, he would then be confronted by Republican opposition – for the Republicans remain overwhelmingly opposed to a fourth stimulus check – and the prospect of a Republican filibuster. While ten Republicans could theoretically be recruited to invoke cloture on the filibuster, this would be virtually impossible in the politicized environment on Capitol Hill, suggesting the measure is doomed.

The only remaining option is through “reconciliation,” a special Senate procedure concerning funding requests that cannot be filibustered. The March 2021 American Rescue Plan Act, which provided for the last round of stimulus checks, was passed in this way, over fierce opposition from the GOP. However, Senate Parliamentarian Elizabeth MacDonough, effectively the body’s rulemaking and referee, informed Schumer that the reconciliation process should be reserved for “extraordinary circumstances”, only allowing him to use it once more during 2021. With Biden’s other priorities – the American Jobs Plan and the American Families Plan – on the line, Biden will likely discourage Schumer and Democratic leadership from using the Democrats’ final remaining get-out-of-jail-free card on a one-time stimulus proposal.

Therefore, until a major shift on Capitol Hill, or a larger compromise of which a fourth stimulus check is a part, don’t hold your breath expecting one.