Why Boycotting the 2022 Beijing Olympics is Pointless 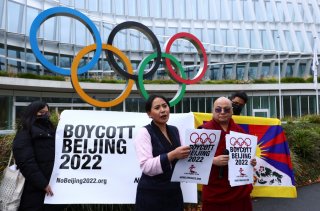 Here's What You Need to Know: Biden should take a cue from Ford, and help ensure the United States sends the best athletes to Beijing and bring home as many medals as possible.

President Joe Biden said this week that his administration is considering a diplomatic boycott of the 2022 Winter Olympics in Beijing over China’s human rights abuses. However, unlike former President Jimmy Carter’s infamous boycott of the 1980 Summer Olympics in Moscow, U.S. athletes would still be allowed to attend, but the official delegation of U.S. government officials that normally attends such an event would not.

The 1980 boycott was one part of a number of actions initiated by the United States to protest the Soviet invasion of Afghanistan. It ended up accomplishing nothing, except to punish those American athletes who spent years, even decades for possibly their one chance at Olympic glory. Moreover, it could be argued that the ill-fated invasion of Afghanistan even led to the downfall of the Soviet Union, which led to the end of the Cold War and freedom for millions across Europe.

At the same time, a civil war was in the cards for Afghanistan and would have likely been as bloody, even without Soviet intervention. While stated with 20/20 hindsight, it should be noted the Soviets acted as a unifying force that brought Afghans together to drive out the invader.

The important thing to remember about the 1980 boycott is that again it punished American athletes—as well as those from Canada and more than a dozen other states, including (with some irony) China. The Soviets went on to have a great Olympics and it was a moment of national pride for the country.

The United States didn’t attend, but many NATO partners (other than Canada, West Germany, and Norway) did, so the boycott had no teeth.

Why is an official delegation from the U.S. government is even on the table? Doesn’t the presence of such delegations impinge on the non-political nature of the games? Yes, many times the host nation’s leaders are present to open the games, but it should be noted that President Ronald Reagan was the first U.S. leader to even attend the games. The games have long been about the host city, not the nation.

It is true that the Chinese Communist Party, much like the leaders of the former Soviet Union, tried to highlight the accomplishments of the nation rather than a mere city, but the United States shouldn’t have gotten caught up in that in the first place.

Likewise, any boycott of government officials would also come just months after officials in Tokyo urged most attending nations to scale back their diplomatic delegations due to the pandemic. In other words, would Beijing even notice if there were slightly fewer officials in the stands?

Instead of an official boycott of any kind, the best course of action would be to take a cue from the late President Gerald Ford and simply not send a political delegation. As a former college football star, Ford made recruiting the best Olympians and bringing home more medals than America's communist rivals a national priority.

Biden should take a cue from Ford, and help ensure the United States sends the best athletes to Beijing and bring home as many medals as possible. He should then and welcome each and every medalist to the White House when they return. That will punish China more than a toothless boycott.