Why Do Special Forces Use the Glock 19—And Not the Glock 48? 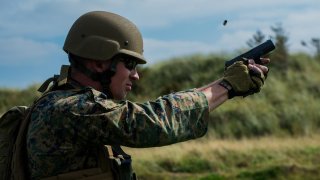 Key point: The Glock 19 is superior in a service pistol role primarily due to being optics ready.

Image: Sgt. Devin Hughes, a member of the Marine Corps Shooting Team, fires a round at a target during the Royal Marines Operational Shooting Competition at Altcar Range near Hightown, England, Sept. 8, 2014. (U.S. Marine Corps photo by Cpl. Cameron Storm/Released)