Why Don't We Let the Free Market Control COVID-19 Vaccinations? 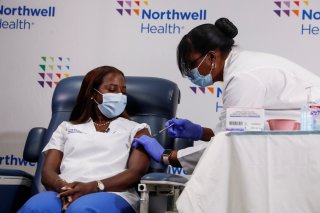 The first wave of Pfizer and Moderna COVID vaccines arriving at health facilities across the country in the past few weeks sparked optimism that we may soon see a light at the end of the tunnel. As more people get vaccinated, the goal of herd immunity—where enough of the population is immune to the virus to prevent its easy spread to the vulnerable—becomes more attainable.

Markets provide the most efficient means of distributing the vaccine to those who want and need it. Instead, policymakers on all levels of government have chosen the opposite: central planning. Now we read of reports in the news than many frontline health workers—those assigned top priority for immunization—are not following the plan. They are reluctant to take the vaccine.

This is very disappointing. Frontline health workers are not only at greater risk of contracting the virus but at greater risk of spreading it around their institution or bringing it home. It is reasonable to expect that, with their background in health care, they would have a greater appreciation for the value as well as the reported safety and efficacy of the two new vaccines. The longer it takes to get an estimated 70% of the population immunized, the longer it will take to reach herd immunity. (Of course, the millions of people who have already contracted and recovered from COVID are immune as a result and contribute to the goal of herd immunity as well.)

Many people who public health officials designated as lower priority for the vaccine are particularly frustrated to learn of this news. They very much want to receive the vaccine but are currently denied the chance, while vaccine vials allocated to first priority designees may go unused since manufacturers require them, regardless of any state policies or lack thereof, to be discarded if they are stored beyond safe time periods.

This unfortunate paradox—people denied vaccination while some unused vaccines are discarded— should come as no surprise to those aware of the failures of central planning. Markets provide the most efficient and accurate way of getting goods and services to those who most value them. In the face of the national public health crisis, policymakers instead resorted to central planning.

At this juncture, the federal government is the purchaser of all COVID vaccines and distributes them to state governments according to state population requirements. The states, in turn, delegate state, county, and municipal public health agencies to work with local health care providers to immunize the population. While the U.S. Centers for Disease Control and Prevention issued guidelines to prioritize who gets vaccinated, states reserve the right to establish their own priority schedules, and some states have not followed CDC recommendations.

Central planning suffers from a lack of local knowledge along with an inability to rapidly adjust to changes in supply and demand. Therefore, it is fortunate that our federal system allows for 51 different possible central plans instead of just one. This reduces potential harm from a one‐​size‐​fits‐​all plan and allows the various states to learn from one another’s experiences. In most instances, states are establishing phased approaches to immunizing the population. Initially, the highest priority groups receive the vaccine. Lower priority groups are phased in as vaccine supplies permit.

As long as central planning remains the approach to immunizing the population, one way to mitigate the unfortunate misallocation of vaccines described above might be to follow the approach most commercial airlines use for boarding planes. States should consider announcing in advance a schedule that, say, gives the first 2–3 weeks of vaccines only to the top priority people; then the next 2–3 weeks to the top plus the next priority level; then the next 2–3 weeks to the first three priority levels, and so on. This way, if first priority people choose not to take the vaccine, lower priority people who wish to take it will not miss out on the chance to do so before the first vaccine batch needs to be discarded. It would also incentivize people in the higher priority levels to hurry up and get vaccinated before the lines get longer.

This proposal might help to reduce the waste of precious vaccine and permit more people who both want and need the vaccine to get it.