Why Every Military Wants Directed-Energy Weapons 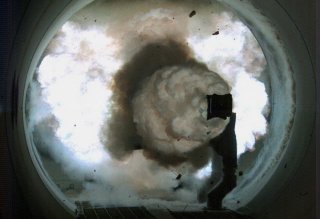 Here’s What You Need to Remember: The concept of a “directed-energy weapon” is one that was conceived by science fiction writers such as H. G. Wells and Jules Verne, but it was in the 1930s that British Air Ministry considered whether a “death ray”-type weapon could be developed. Work was undertaken by Robert Watson-Watt of the Radio Research Station, and while he and colleague Arnold Wilkins concluded such a project wasn’t feasible it did result in the development of radar.

In recent years, work has continued to develop such a directed-energy weapon based on technologies ready to field now, and this has included high-powered microwaves, while defense contractors such as Lockheed Martin have researched, designed, developed and captured electromagnetic energy and elevated its power to create innovative directed-energy solutions. The use of directed energy would be a serious force multiplier, which is why so much emphasis has been placed on its development.

According to a new report from research firm GlobalData, directed-energy weapons (DEWs) have matured quickly and are now transitioning towards widespread, practical and cost-effective field development. Should these weapons be successfully developed and deployed, then DEWs could have an immense potential to be revolutionary in the long-term.

The research firm reported that in just the past two decades, military use of DEWs has also moved from the research laboratory to the operational force, and lasers have become a highly effective instrument for military operations. The study, “Directed Energy Weapons (Defense)—Thematic Research” also stated that the growing investment trend is being witnessed across modern armed forces and will further continue to do over the next decade, which will drive more investment in research and development.

The United States currently leads in the development of DEWs worldwide and has doubled its spending on the technology from fiscal year (FY) 2017 to FY19—from $535 million to $1.1 billion. Other countries including China, India and Russia are also investing in the development of DEWs, but many regional powers have not shown the same level of zeal for the technology. In fact, Israel is also the only Middle East and North Africa (MENA) region that is actively investing in the technology.

The current focus of DEWs has been to use the technology in a defensive capability, such as protection of critical infrastructure as well as military vehicles and platforms, where the technology could be used against missiles, rockets, unmanned aerial vehicles (UAVs)—including drone swarms—and boats.

“While DEWs are currently focused on defensive functions, and continue to have huge potential in this area, they could also provide several capabilities and advantages over traditional weapons because of their speed-of-light delivery, precision engagement, controlled/scalable effects, logistical benefits and low-cost per shot,” explained Captain Nurettin Sevi of the Turkish Navy and defense analyst at GlobalData.

“DEWs have recently started to be used alongside existing kinetic weapons in combat areas,” Sevi added. “They have immense potential to be a game-changer in the near future, as well as revolutionary in the long term. However, armed forces and defense industries still need to address some technical challenges when developing these cutting-edge weapons. For example, laser weapons effectiveness decreases because of atmospheric absorption, scattering, turbulence and thermal blooming.”

The technology behind DEWs could also be crucial in addressing threats from other advanced weapon systems, notably hypersonic missiles and the aforementioned drones. DEWs could also be used in non-lethal applications such as crowd control or disabling machinery. The evidence presented by GlobalData indicates that directed-energy will soon become one of the most powerful technologies for success on the battlefield and will eventually replace many existing forms of weaponry.

“Developing combat-capable DEWs will be a crucial differentiator between military forces in the 2020s,” Sevi said.

Directed Energy Weapons, the Next Big Weapon of War?