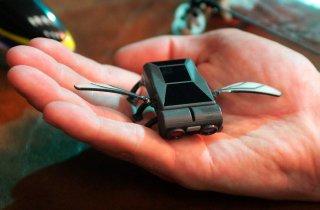 As The National Interest previously reported, the U.S. Defense Advanced Research Projects Agency (DARPA) has been working with industry to develop distributed, secure and trusted-computing for heterogeneous swarms of autonomous vehicles—namely drones.

These could be deployed in swarms to overwhelm an enemy and thus have earned the apt anagram AFADS for Armed, Fully-Autonomous Drone Swarm. These would have the ability to locate, identify and even attack targets without human interaction. Advances in computer power, processing speed and AI are rapidly changing the scope of what these platforms are able to perform without needing human intervention.

The U.S. Army isn’t alone in developing weapons that would rely on swarm tactics, as the U.S. Navy has also begun to develop ways that autonomous platforms could engage an enemy with swarming attacks, but now the question is being asked whether drone swarms are actually a type of WMD?

The paper was prepared for the United States Air Force Center for Strategic Deterrence Studies, and it addressed what exactly is a WMD.

There are at least 20 definitions, used by the United States government alone and these include six categories: nuclear, biological and chemical (NBC) weapons; chemical, biological, radiological or nuclear (CBRN) weapons; CRBN and high-explosive (CBRNE) weapons; and CBRN that cause massive destruction or kill large numbers of people. Also included as WMD are weapons that cause massive destruction or kill larger numbers of people, which does not necessarily include or exclude CBRN weapons. Finally, there are also WMDs or similar effects, potentially including CBRNE weapons and other means of causing massive disruption such as a cyberattack.

Kallenborn explained, “WMD can be considered distinct from conventional weapons based on their degree of harm, morality, and method of action. WMD are literally ‘weapons of mass destruction.’ They can cause significantly more harm than traditional weapons.”

He added that while swarms could serve as strategic deterrent weapons, the availability of other defenses make them less ideal for this role, especially compared to nuclear weapons. In that regard, the swarm drones are more of an offensive weapon. Ominously, this could include a scenario where, “particularly nefarious states may be drawn to drone swarms and AFADS as genocidal weapons.”

Other potential dangers addressed include the ability for drone swarms to strike commercial aircraft when launched by terrorists from outside an airport, thus lowering the operational risk because the attack could avoid a security checkpoint.

Fortunately, there are already defenses to counter such attacks. This could include low cost-per-shot weapons such as lasers, rail guns and even conventional machine guns that could target swarms of drones. High-powered microwaves could also be used to disrupt or destroy the electronics within the drones, suggested Kallenborn, and he added that swarms could be used to defeat other swarms.

The Pentagon has already pondered that option, and the Army is reportedly already developing a counter-drone kill chain. While small it is easy to see how swarms of drones could indeed be weapons of mass destruction.