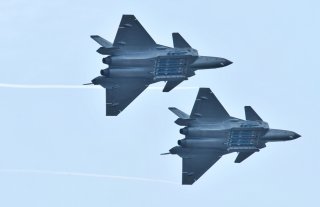 Here’s What You Need to Remember: Debates and uncertainties continue to swirl around how agile, lethal, stealthy and advanced China’s J-20 stealth fighter may be.

Several previous reports cite production problems and delays with initial J-20 manufacturing, particularly centered around the J-20’s “high-thrust turbofan WS-15 engine.” A report from the South China Morning Post says J-20 engine work has “fallen behind schedule.” However, it certainly remains feasible that any production or engineering challenges have been addressed and rectified, clearing the way for larger-scale manufacturing. Furthermore, it is entirely possible that China could eventually build a very large fleet of J-20s, and ultimately produce a force designed to more fully rival the F-35 jet.

This article was first published in July 2020.