Why Israel Made the "Galil" Rifle 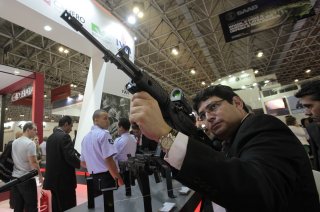 Here's What You Need To Remember: The Galil is no longer Israel's primary battle rifle - that position has been taken over by the M4 carbine. So why is the Galil still so iconic?

The history of Israeli’s Galil family of rifles begins in the aftermath of the 1967 Six Day War. During that conflict, Israel’s standard-issue firearm, Israeli-made copies of Fabrique Nationale’s FAL battle rifle, fared rather poorly. At issue was the rifle’s reliability, particularly in the arid and dusty conditions endemic to the Sinai Peninsula. Furthermore, the FAL is a rather long rifle, limiting maneuverability in more enclosed, or urban spaces.

Post-war, Israeli evaluated a number of rifles to replace their FAL, including captured AK-47s. In particular, the rugged Soviet-designed AK-47 was prized for its reliability, even when little maintenance and cleaning care was given to it. It was this rifle pattern that Yisrael Galil, known as the “father of the rifle” in Israeli military circles, used for creating his Galil rifle.

These Parts, Those Parts

Using the iconic AK-47 as a base, Galil also incorporated features from other weapons, including the Finnish RK 62, which was itself an improved, high-quality AK-47 copy. The Galil featured a more ergonomic fire selector, and, in a recognition of the FAL’s unwieldy length, a foldable buttstock and shorter barrel. In addition, a carrying handle, quite similar to the FAL’s was added, and the rifle’s charging handle was angled upward, allowing left- or right-hand charging and making it somewhat ambidextrous.

Initially, three versions of the Galil were produced: a shortened barrel version for tank and personnel carrier crews, as well as two full-length versions—one of which famously came with a foldable bipod, attached wire cutter—and even a bottle opener integrated onto the rifle’s gas block, allowing creature comforts to be close at hand.

Though the indigenously built and designed Galil did offer significant improvements over the FAL it was intended to replace, it ended up playing second fiddle to the American M16 and the later M4 carbine, both of which were considered to be more accurate and more light-weight, if less robust than the Galil.

Though no longer Israel’s standard-issue, frontline rifle, it is still in use in limited numbers, and has been successfully exported to a number of countries around the world. Aside from the initial three Galil variants, a number of other variants, including sniper rifle and carbine variants exist, a testament to the rifle’s robust, reliable design and construction. Not too bad for a rifle that never quite made it as Israeli standard-issue.

Caleb Larson is a defense writer with the National Interest. He holds a Master of Public Policy and covers U.S. and Russian security, European defense issues, and German politics and culture. This atticle first appeared last month.