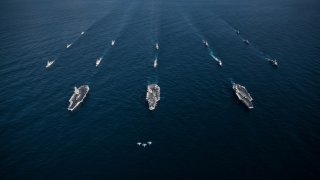 Here's What You Need To Remember: Washington must not regard a maritime quarantine as a cheap, quick, or painless alternative to land warfare. Just the opposite. It would be expensive, time-consuming, and resource-intensive.

James Holmes is J. C. Wylie Chair of Maritime Strategy at the Naval War College and the author of A Brief Guide to Maritime Strategy, out this month. The views voiced here are his alone. This article first appeared last year.