Why the Navy's F/A-18 Super Hornet's Days are Numbered 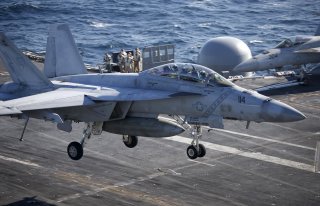 Key Point: While F/A-18 developers would not suggest the plane could be stealthy, developers did make efforts to lower the radar signature of the aircraft by adding conformal fuel tanks and building a smoothed-over external weapons pod.

U.S. Navy F/A-18 fighter jets were initially built to fly for roughly 6,000 hours. But much of the fleet has wound up hitting or at least preparing for 10,000 hours due to the service’s multi-year Service Life Extension Program.  The effort was successful, as it propelled the 1980s-era jet well into the 2020s with a host of upgrades, adaptations, technological improvements and sustainment efforts.

There has recently been a demand in the U.S. Navy for more F/A-18s, which has repeatedly gone unmet due to fleet size constraints. Nonetheless, the aircraft’s frames have been reinforced and maintained, its avionics have been thoroughly revamped and replaced, new weapons and weapons guidance systems have been added, conformal fuel tanks have extended range and new, high-tech infrared search and track sensors have improved precision targeting and hardened the aircraft for an electronic warfare combat environment.

The aircraft has performed admirably for many years and has even relied upon advanced sensors and communications technology to function as a surveillance and targeting node against ISIS.

While F/A-18 developers certainly would not suggest the plane could in any way be stealthy, developers years ago did make several efforts to lower the radar signature of the aircraft by adding conformal fuel tanks and even building a smoothed over external weapons pod to decrease the exposure of jagged edges and protruding shapes likely to generate a return radar signal. The aircraft was even engineered with a carrier-deck-landing improving software called “magic carpet” added to help pilots smooth through a glide scope or descent onto a carrier flight deck.

All of these enhancements, however, are not likely to prolong the imminent death of the long-serving F/A-18. After all, the older airframe design is not something that could ever be stealthy, meaning it would likely be of little value in a high-end fight against 5th-generation adversaries or advanced air defenses.  Not only that, but the rapid arrival of the far more capable F-35C and now-in-development 6th-generation fighter may decrease any Navy appetite for extending F/A-18s longer.