Why The Navy's Pilots May Not Be Ready to Fight China 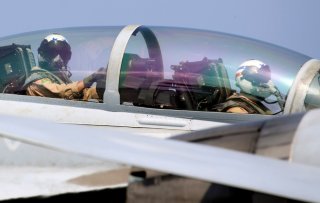 Here's What You Need to Remember: The good news for the wider Navy is that it seems to recognize it has a problem, Holmes noted. Naval professionals such as the Tailhook panelists are working hard to improve aviators’ training while encouraging the Navy and industry to prioritize the right weapons programs, all in a context of “ruthless” honesty.

A panel of young aviators voiced a harsh warning to the audience at the U.S. Navy’s annual Tailhook aviation convention in Nevada in September 2019.

The Navy’s pilots aren’t ready to do battle with a high-tech foe such as China. The sailing branch’s planes must improve. Its training, too.

“Commentary from Tailhook 2019 suggests a new crisis is at hand,” James Holmes, a professor at the U.S. Naval War College in Rhode Island, wrote in Proceedings, the professional journal of the U.S. Naval Institute.

Holmes likened naval aviation’s current dilemma to a similar emergency that took place during the 1960s. “Back then the foe was North Vietnam, a doughty opponent that nonetheless posed little threat outside its borders,” Holmes wrote.

By the 1960s the Navy fielded carrier-based fighter jets whose design philosophy centered on guided missiles. It had become an article of faith that U.S. aircraft would prosecute missile engagements at “standoff” range, firing beyond enemy weapons range and beyond visual range. Adversaries would never get off a shot in reply. Missiles had rendered gunfights a thing of the past, or so it was thought in the early 1960s.

Yet Ho Chi Minh’s pilots were an ornery lot, refusing to follow the script American tacticians had written for them. Rather than remain at standoff distance to be blasted out of the sky, North Vietnamese airmen closed to dogfighting range and took their chances in gun duels.

Imagine that: an enemy might decline to do your bidding. U.S. aviators were ill prepared for North Vietnamese tactics. Indeed, the F-4 Phantom—the Navy’s premier fighter in the 1960s—was not even equipped with guns for close-range combat. ….

A tougher-than-expected antagonist stunned naval aviation into arming its warplanes for dogfighting, developing tactics for close combat, and re-grounding naval aviation’s culture on solid precepts—including the soundest of all military assumptions, namely that America’s enemies get a vote in war and will always cast it against our efforts.

The present crisis has its roots in the period of relative geopolitical calm that followed the end of the Cold War, Holmes explained. Naval aviation’s training standards slipped. Its planes went years without meaningful upgrades.

China’s rise as an economic and military power, and Russia’s own military resurgence, ended the calm -- and revealed that U.S. naval aviation was unprepared for major warfare.

“Recent years, declared one [panelist], have seen a ‘huge shift’ from the relatively placid interlude following the Cold War,” Holmes wrote. “Carrier aircraft no longer boast the same ‘kinematic advantage,’ or edge in speed and energy maneuverability, that once granted them near-invincibility in the Balkan wars, Afghanistan and Iraq.

Aircraft designers must try to restore that hardware advantage, making air battles lopsided once again, even as aviators experiment with new tactics to ensure the U.S. “man in the box” is the finest combat pilot in the world.

Fittingly for teachers, the panelists fretted more about human than matériel shortcomings. They spoke forcefully on behalf of additional manpower for naval aviation, including the training apparatus. Squadrons need access to more capacious airspace to practice countering longer-range enemy weaponry and handling longer-range weapons of their own.

The good news for the wider Navy is that it seems to recognize it has a problem, Holmes noted. Naval professionals such as the Tailhook panelists are working hard to improve aviators’ training while encouraging the Navy and industry to prioritize the right weapons programs, all in a context of “ruthless” honesty.

“Renewing the culture of self-criticism promises to be easier in the tactical realm than in the murkier, more ambiguous realm of strategy and policy,” Holmes wrote.

Results are instant and verge on irrefutable in air combat, whereas historians quarrel without end about strategic cause and effect in long-ago conflicts.

Institutional honesty is a pivotal virtue for the aviation community, as indeed it is for any military institution. Naval aviators need to admit they may lose under certain circumstances—otherwise it would not be a fair fight—and harness that conviction to fire the quest for innovation.

The panel espoused employing objective, data-driven analysis to evaluate aircrew performance in battle scenarios rather than issuing subjective, easily fudged verdicts certifying who lost and who won. A ... commentator [with the Topgun training community] reported simulating “red air” that acquitted itself perfectly every time. Going up against a perfect foe “punishes” even slight errors committed by “blue air” (U.S. crews).

“Good,” Holmes wrote. “Better to err on the side of making the red team superhuman than depict it as a pushover.”

“In a way, China and Russia have rendered the U.S. military a service through their prowess and sheer cheek. Formidable competitors are compelling U.S. fighting forces to survey the tactical and strategic environment anew, sharpen their skills, and fortify their nerves.”