Why No One Remembers The Second B-29 That Nuked Japan 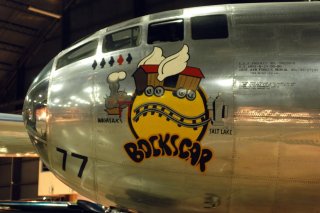 Here's What You Need to Remember: So what is largely forgotten is that while Bock didn't pilot Bockscar he was in fact present in the other B-29, The Great Artiste, which was used for scientific measures and photography of the effects caused by the release of Fat Man.

The Enola Gay is remembered today as being the aircraft that dropped the first atomic bomb on Japan nearly seventy-five years ago, and its infamous flight has been the subject of much debate. The aircraft’s mission has been chronicled in movies, TV shows and even a 1980s anti-war song by the British New Wave group Orchestral Manoeuvers in the Dark—although the song was as much about UK’s Prime Minister Margaret Thatcher’s decision to allow nuclear missiles to be stationed in Great Britain.

In fact, the B-29 bomber has remained so controversial that there were protests when it was put on display at the National Air & Space Museum in Washington, DC.

Then there is Bockscar, another B-29 that hasn't shared in such controversy—at least not to the level of its sister aircraft. In fact, Bockscar is largely forgotten even though it carried the second atomic bomb—Fat Man—which was dropped on Nagasaki days after the first bomb was dropped on Hiroshima.

Bockscar was actually one of fifteen specially modified “Silverplate” B-29s that were assigned to the 509th Composite Group. While most B-29s were armed with eight .50 caliber machine guns in remote-controlled turrets along with two additional .50 caliber machine guns and one twenty-millimeter cannon in the tail, these modified aircraft had retailed the tail guns and even had their armor removed to save weight to be able to carry the extremely dangerous atomic bombs at extreme flight distances.

What is also notable about the two aircraft is that their respective pilots who regularly flew the aircraft named the planes. Colonel Paul Tibbets, who piloted the Enola Gay, had named his aircraft for his mother “Enola Gay Tibbets” (1893–1983) who herself was named after the heroine of the novel Enola; or, Her Fatal Mistake. In the case of Bockscar—not to be confused with the Fairchild C-119 Flying Boxcar—the moniker was a play on Captain Frederick Bock's last name, who had previously participated in air raids on Japan that were launched from parts of China controlled by the Allies.

Yet it wasn’t Bock who piloted the aircraft he had named on August 9, 1945.

That is because Maj. Charles W. Sweeney had used Bockscar for more than ten training and practice missions even though he and his usual crew had piloted another aircraft named The Great Artiste. When Sweeney and his crew were chosen to deliver the Fat Man while Bock and his crew were chosen to provide observation support the decision was made to swap the crews rather than to move the complex instrumentation equipment.

So what is largely forgotten is that while Bock didn't pilot Bockscar he was in fact present in the other B-29, The Great Artiste, which was used for scientific measures and photography of the effects caused by the release of Fat Man.

Today the Enola Gay remains in the National Air & Space Museum in Washington, DC while Bockscar is in the collection of the National Museum of the United States Air Force in Dayton, Ohio.