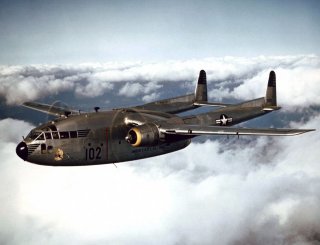 The United States Air Force has relied on the massive C-130 cargo aircraft since the 1950s, and many of the aircraft in service could even be flying well into the 2030s. These cargo aircraft have been used in some fascinating ways—including being transformed into bombers and gunships—but there is another transport aircraft that truly took part in some unbelievable exploits.

That would be the C-119 Flying Boxcar, which was developed from the Fairchild C-82 Packet, a twin-engine, twin-boom, twin-tail transport that was designed to carry cargo, personnel, litter patients and even mechanized equipment. It lived up to the “Flying Boxcar” name as it featured clamshell cargo doors at the rear of the cabin, which could be used to drop cargo and even troops by parachute! As a transport, the C-119 could carry up to sixty-two fully equipped soldiers or 30,000 pounds of cargo.

From the time of its introduction in the 1940s it was modified and upgraded as new technologies were developed. It made its maiden flight in November 1947 and by the time production ended in 1955 more than 1,150 of the Flying Boxcars had been produced. The C-119 was used in the Korean War as a transport, where it carried troops and supplies.

Among its most important airlift mission of the war was in the bitterly cold winter of 1950 when C-119Bs were used to air-drop bridge sections to U.S. troops trapped by the Communist forces at the Chosin Reservoir. Those components and sections were used to repair a bridge over a deep chasm, and the resulting effort allowed thousands of U.S. Army soldiers and U.S. marines to escape.

Throughout the Cold War the Flying Boxcar continued to make deliveries around the world. During the Vietnam War the aircraft in the AC-119G “Shadow” and AC-119K “Stinger” configurations were also used as gunships to support ground forces. With side-firing weapons, those aircraft could fire up to 6,000 rounds per minute as they flew low and slow over enemy positions.

However, the most notable action involving a C-119J Flying Boxcar occurred on August 19, 1960 when the aircraft was used in the world’s first mid-air recovery of an object returning from space. The aircraft utilized a special recovery gear that was lowered from the open rear door, and it snagged the parachute of a Discoverer XIV satellite, which had been ejected from an orbiting space vehicle. The Discoverer XIV had been launched into a polar (north-south) orbit by an Agena A vehicle atop a Thor booster from Vandenberg Air Force Base, California.

After seventeen passes around the earth, the Agena A vehicle ejected the satellite from its nose. After the Discoverer XIV reentered the atmosphere it released the parachute and floated back. It took three passes, but the C-119 was able to successfully snag the canopy at an altitude of 8,000, after which a winch operator aboard the aircraft then reeled in the satellite.

The C-119 was also used by the Royal Canadian Air Force as a fire bomber­and. In fact, this type of aircraft can be seen in the Richard Dreyfuss movie Always. It was also seen in the 2004 version of the film Flight of the Phoenix.