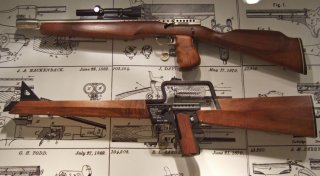 Here's What You Need To Remember: The Gyrojet project was an unmitigated failure. The design suffered from poor accuracy, limited stopping power, and offered no advantages over traditional firearms. Though long since out of production, Gyrojet variants are now valued as collector items due to their rarity and uniqueness.

The Gyrojet, as this class of firearms was called, were quite odd. Though they sported beautiful wooden hardware, they blended elements of established firearms technology with a space-age design. A number of variants were produced, including an assault rifle, carbine, and several pistol designs.

The ammunition they used was essentially a small rocket, rather than a bullet and looked somewhat like rounded shotgun shells with simple hole or diagonally-cut vents for the escaping rocket gasses. The small-diameter projectiles were fired from a smoothbore rifle barrel, which was basically a thin tube. Instead of barrel rifling imparting spin onto the small rockets, the small exhaust vents spun the rockets, giving them a measure of in-flight stability.

Though they spun like bullets, they were inherently less accurate. In traditional firearms, a bullet traps the expanding gas behind it and accelerates until it leaves the barrel. Once a bullet leaves the barrel, it starts to slow down. Rifle barrels are built to exact specifications, as any deviations from the correct internal diameter will adversely alter a bullet’s accuracy and range. Most bullets are fired at more than the speed of sound and make a loud noise when they exit a barrel. This crack is the sound of a bullet breaking the sound barrier.

In contrast, the Gyrojet’s rocket projectiles were comparatively slow. While a bullet’s terminal velocity is achieved the moment it exits a barrel, a rocket’s terminal velocity is achieved when it has burned up all of its fuel. As a consequence, rocket projectiles start more slowly, then accelerate until they are “empty.” What this meant in practice however, was that the Gyrojet was very ineffective at close ranges, 30 feet or less.

The Gyrojet projectiles were also incredibly variable. Some rounds did indeed break the sound barrier, as evidenced by the bullet-like crack they emitted, whereas some rounds did not, indicating a degree of variability in performance between rounds—which had a negative impact on both accuracy and performance. As a consequence, accuracy was terrible when compared to traditional firearms. The ammunition was also susceptible to fouling. The four gas vents at the rear of the bullets had to remain free of dirt or other obstructions for the exhaust to be balanced. If the ammunition was not clean, the bullets would follow an erratic, unpredictable path.

The Gyrojet project was an unmitigated failure. The design suffered from poor accuracy, limited stopping power, and offered no advantages over traditional firearms. Though long since out of production, Gyrojet variants are now valued as collector items due to their rarity and uniqueness. Likewise, rocket ammunition is no longer manufactured, and unfired rounds can fetch high prices at auction or online. Aside from private collection, the Gyrojet is no more—and probably for the better.