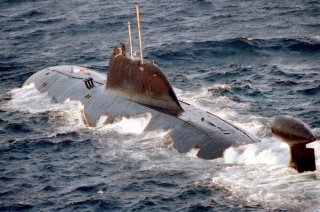 Here's What You Need To Remember: The Golden Fish was really, really fast. It was also really, really loud. This is a problem for submarines, which are supposed to be stealthy.

In the first two decades of the Cold War, it became clear to the Soviet military establishment that their submarine lineup was in dire need of reform. At that time, the Soviet fleet was dependent on increasingly outdated “Whiskey-class” iterations of WWII-era German submarines.

The Soviet political leadership conceived a shock therapy solution to this problem: a new, “Project 661” submarine class built on a platform of comprehensive, bottom-up innovation. And this wasn’t just an empty boast; Project 661 engineers were expressly forbidden from borrowing on prior design principles.

The result, nicknamed “Golden Fish,” was laid down in 1963 and finally commissioned six years later; it was to be the first and last Project 661 vessel. Breaking several records both for better and for worse, Golden Fish is a study in extremes. More fundamentally, it illustrates the benefits and challenges of a single-minded, politically-driven focus on innovation as opposed to iteration.

Project 661’s unprecedented design choices began with its exterior. Golden Fish was to be the first submarine constructed out of Titanium, a massive undertaking requiring the establishment of new supply chains and extensive trial and error. Titanium offered several key performance and maintenance benefits: greater resilience, potential speed, and resistance to corrosion.

In keeping with its innovation focus, Golden Fish was one of the first submarines to be armed with the new P-70 “Amethyst” anti-ship missiles. Partly as a result of using this new metal and partly from a conscious attempt to break with the past, Golden Fish featured a radically different, much more aggressively-rounded outer hull as compared to its Whiskey-class predecessor.

However, it was the decision to install two VM-5m pressurized-water nuclear reactors that gave the Project 661 vessel a massive performance advantage over its VM-4 and VM-A equipped predecessors. The VM-5M enabled Golden Fish to achieve a record that remains uncontested to this day: the world’s fast submerged speed. According to official “Military Book of Records” published by the Russian Ministry of Defense, “On December 18, 1970, the Project 661 K-162 [technical name for Golden Fish]  submarine achieved a world record for fastest underwater speed—44.7 knots [over 50 miles per hour].”

The submarine did have one major, relatively successful engagement that demonstrates the potential benefits of high ultra-high-speed submarines. In 1971, it gave aggressive chase to the USS Saratoga with-- according to the captain-- multiple chances to target and destroy the American aircraft carrier.

But this remarkable achievement in top speed came with fatal costs in other performance areas. Whereas submarines are stealth weapons by their design nature, Golden Fish produced far too much noise-- reportedly upward of 100 decibels-- to be effectively and consistently used in most combat scenarios. Further compounding its operational value, the Project 661 crew would have severe problems using their own onboard sonar radar when travelling at such breakneck speeds.

The submarine did break another, much less flattering record. “Golden Fish” was a reference to its stunning cost: over two billion rubles, or approximately 1% of the Soviet Union’s 1968 GDP. This does not factor in the costs of addressing the additional component degradation from traveling at such a speed.

Project 661 was scrapped as a result of these technical and financial problems, but was it an unmitigated failure?

Certainly, it was not the breakthrough solution against US carrier battle groups that the Soviet Navy was looking for.

But as Russian military expert Andrei Frolov observes, Project 661’s obsessive focus on long-term innovation introduced important trends in Soviet submarine construction; these include its titanium construction and ingenious reactor integration. More importantly, its “experimental” nature provided a generation of Soviet submarine engineers with high-level technical expertise, demonstrated in the following years with the introduction of the Afla-class submarine line.