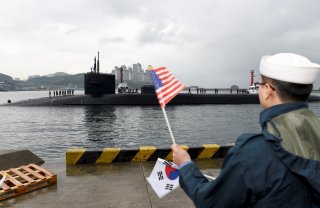 Here's What You Need to Remember: Interestingly, though North Korea is the South’s biggest enemy, it is not the only potential one. There have been tensions recently between Japan and South Korea, including an incident between a Japanese destroyer and a South Korean patrol plane. A South Korean sub could carry ballistic missiles aimed at Japan, or raid the shipping lanes that sustain the Japanese economy.

When North Korea is your neighbor, there are things you need. A strong army and air force, smart bombs, anti-missile defenses.

What you don’t need is nuclear-powered submarines to sail the ocean when the enemy is thirty miles from your capital city.

Nonetheless, South Korea is studying whether to buy nuclear-powered submarines. The South Korean navy has acknowledged that it has been running a task force to examine the development of nuclear subs.

“With longer-term perspectives to have nuclear-powered submarines, we have been running a task force of our own,” the Navy said in a report to South Korea’s parliament, according to the Yonhap news agency.

For now, the project appears to be just in the conceptual stage. “Operating the task force does not mean that the Navy is pushing for related projects in earnest, as nothing has been decided,” said a navy officer. “It is mainly collecting information regarding the matter.”

This isn’t the first time that the nuclear sub issue has arisen. In 2003, South Korea shelved the idea after it was leaked to the press. “Then in 2017, the defense ministry carried out research on the matter through private entities, which led the military to feel the necessity of the asset,” Yonhap said.

South Korea already has a conventional submarine program. In 2018, the navy launched the first of nine 3,700-ton KSS-III submarines—the first South Korean-designed sub, and one that will be armed with cruise and ballistic missiles. “Some speculate that the military might push to develop its 3,000-ton Chang Bo Go-III submarine as a nuclear-powered one,” Yonhap noted. “Currently, the country is carrying out the project to build the 3,000-ton indigenous submarine by 2031, with a process to develop its system set to begin in earnest this year.”

Nonetheless, the question remains: why does South Korea need nuclear submarines? True, they are prestige items. But a 19,000-ton U.S. Ohio-class ballistic missile sub is big, expensive and relatively noisy compared to quiet Air-Independent Propulsion submarines such as the KSS-III.

In any event, the threat to South Korea is from North Korea’s nuclear weapons… or its ballistic missiles… or its huge force of tanks and commandos… or the vast arsenal of hidden artillery and rockets that can turn Seoul into a “sea of fire.” None of which will be stopped by nuclear-powered submarines, even if armed with ballistic (or nuclear-tipped?) missiles.

South Korea seems to be thinking of this as a deterrent. Nuclear submarines can hide in the ocean depths for months, so even if North Korea were to blitz across the DMZ, South Korean subs would survive to launch a retaliatory missile strike. Perhaps more important, it would be a strike under Korean control, rather than relying on the United States.

But why are nuclear submarines necessary for this? Israel’s conventionally-powered Dolphin-class subs are believed to be armed with nuclear-capable cruise missiles. From the Red Sea or Eastern Mediterranean, they can hit Iran, just as conventional South Korean subs in the Sea of Japan could hit Pyongyang.

Ultimately, the question boils down to this: if North Korea isn’t deterred by the enormous U.S-South Korean military machine, nor by America’s overwhelming nuclear arsenal, then why would it be deterred by a South Korean nuclear-powered sub?

Interestingly, though North Korea is the South’s biggest enemy, it is not the only potential one. There have been tensions recently between Japan and South Korea, including an incident between a Japanese destroyer and a South Korean patrol plane. A South Korean sub could carry ballistic missiles aimed at Japan, or raid the shipping lanes that sustain the Japanese economy.

While a military confrontation between the two nations isn’t likely, a missile-armed South Korean nuclear sub—even if ostensibly aimed against North Korea—can’t be any more comforting to Tokyo than to Pyongyang.