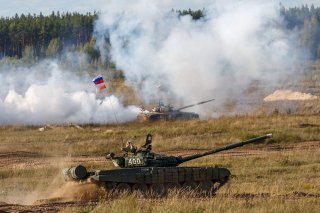 Here's What You Need to Remember: Russia currently maintains the largest force of armored vehicles in the world, with more than 22,000 in its arsenal—more than twice as many employed by the United States military. Some 12,000 of those vehicles are main battle tanks.

A question that was routinely asked throughout the Cold War was whether nuclear weapons could reduce the need for other forms of military hardware? In other words, if you had nuclear weapons as a deterrent why would you need such weapons as tanks? However, nuclear weapons have largely been seen as just one component of an integrated defense strategy.

That is why military planners continue to push forth the doctrine that infantry will forever remain the queen of the battlefield, while artillery will remain its king. The tank will serve in a role that combines the capabilities of both—with a good mix of what was the domain of the cavalry.

This week a member of the board of Russia’s Military-Industrial Commission, Mikhail Osyko, told TASS in advance of the upcoming Army-2021 International Military-Technical Forum, that he believed that tanks will thus maintain their status as the major striking force of land troops—at least provided there is no nuclear war.

“We all hope that a nuclear war will never break out,” said Osyko to the Russian news outlet. “We believe in this. I think that in these conditions tanks will continue to be a major striking force of the land troops.”

The defense official added that tanks are a formidable combat unit and the land troops’ striking force cannot be imagined without them today.

“Perhaps, there will be no longer massive tank battles similar to the Prokhorovka engagement during the [1941-1945] Great Patriotic War [of the Soviet Union against Nazi Germany],” he added, referring to the Battle of Prokhorovka, which was the largest tank engagement between the Soviet forces and Nazi troops.

The massive engagement, which was part of the Kursk offensive launched by the Germans to turn the tide on the Eastern Front, took place near the village of Prokhorovka on July 12, 1943, between the Soviet Red Army and German forces. It involved up to 1,200 tanks and self-propelled guns from both sides. Instead of halting the Soviet advance, the battle resulted in a significant defeat for the Germans.

Russia All In With Tanks

Osyko’s commitment to tanks shouldn’t come as a surprise. Russia currently maintains the largest force of armored vehicles in the world, with more than 22,000 in its arsenal—more than twice as many employed by the United States military. Some 12,000 of those vehicles are main battle tanks (MBTs); still double the number of America’s tanks, but the question remains how battle-worthy those aging vehicles may be.

Even as some of its T-72, T-80, and T-90 tanks have been upgraded, vast numbers of Russia’s tank force dates back to the Cold War and are sitting idle in storage, while less than two dozen of Moscow’s highly touted T-14 Armata have rolled into service. Russia may have the numbers, but if the tanks are as reliable as an old junker, perhaps the nuclear triad remains Moscow’s best deterrent.