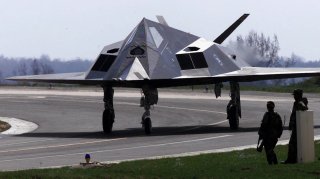 Key Point: An F-117 is much less stealthy than an F-22 or F-35. However, make no mistake, the aircraft is stealthy, as one can see looking at its flat wings, absence of external weapons pylons.

Air Force experts in charge of the service’s massive Red Flag real-combat replicating wargame have for many years explained that the “red team,” or adversarial force, against which their forces go to war is “threat representative.”

This means that Red Flag places 5th-generation aircraft such as F-22s and F-35s against enemy 4th and 5th generation aircraft intended to closely replicate major adversaries such as Russia and China. The service also uses some of its testing-specific F-22s to go up against friendly or “blue team” F-22s in what could be described as a stealth vs. stealth matchup or 5th-gen vs. 5th-gen war.

Meanwhile, an interesting report in The Drive says that Red Flag leaders have also been resurrecting and flying the black, Gulf-War famous stealthy F-117 Nighthawks. While the aircraft has now been retired for many years, after making history as the first stealth fighter ever to fight a war, several of the planes are now experiencing what the Drive story says is a “secretive second life.”

The F-117 is slightly less rounded or wing-body blended, and does show some sharper angles with steep inclines and edges potentially visible to modern air defenses. This would indicate, to the observer’s eye, that an F-117 is much less stealthy than an F-22 or F-35. However, make no mistake, the aircraft is stealthy, as one can see looking at its flat wings, absence of external weapons pylons. Also, enemy air defenses were far less advanced during the Gulf War, compared with how they function today as systems that claim to even threaten some stealth aircraft.

Training against stealth fighters, in any capacity, would likely prove extremely worthwhile for F-22 and F-35 pilots preparing for an entirely new level of warfare engagement. The F-22 and F-35 have both already served in combat, against ISIS and the Taliban respectively, both scenarios wherein the U.S. Air Force enjoyed complete superiority and dominance of the skies. As a result, both aircraft launched air-to-ground weapons, which did demonstrate that the dominant F-22 and F-35 are both capable of close air support, an extremely significant capability given the age and slow retirement of the famous Air Force A-10.

This history of actually going to war in what leaders call a “permissive” environment without enemy air resistance, explains why the Air Force continues to move vigorously on training exercises, testing and, wargaming against stealthy, 5th-generation adversary aircraft. Certainly, any kind of great power warfare between the United States or China would likely heavily involve an extremely dangerous and lethal air war for dominance of the skies. It might not even be a stretch to suggest that whichever country achieves air superiority first is almost certain to prevail.