Why the U.S. Navy Needs a Cheaper, Smaller Torpedo 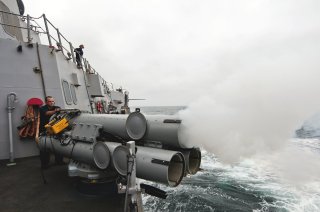 Here's What You Need to Know: The Navy is expected to select a contractor to build the VLT in early 2022 and award them with a three-year deal to start building the weapon.

The Navy is building the first man-portable torpedo that can destroy surface warships, submarines, undersea drones and other targets.

The Very Lightweight Torpedo (VLT), which is only six feet by nine feet, introduces a new sphere of tactical applications and launch points for Navy commanders to consider. The torpedo can be dropped from the air, launched from small submarines, or fired by forward-operating undersea drones. The Navy’s academic and industry partners have been collaborating on this project for many years. In fact, Northrop Grumman has already built prototypes.

“The actual size is designed to fit into the six-inch countermeasure launchers on current submarines, and not launched out of normal twenty-one-inch tubes,” according to David Portner, a senior project manager for Northrop Grumman told Warrior Maven.

This weapon is likely engineered to attack targets on the move that are equipped with torpedo countermeasures such as submarines with advanced equipment. That implies that developers of VLT guidance technology have been focused on engineering targeting technologies and sensors able to differentiate submarines from decoys. Its guidance systems and undersea trajectory will probably be able to evade jamming and other interference that would have prevented other torpedoes from hitting their targets. Surface ships also have “jammers” and defenses that engineers must take into account when building the VLT.

Northrop Grumman is attempting to leverage its own internal research and development funds while seeking guidance and input from Navy engineers and weapons experts about requirements and desired performance parameters. Portner said that Northrop Grumman based its prototype on Navy drawings from 2017 and has continued dialogue with the service to recommend adjustments and respond to emerging Navy requirements.

The successful construction of the weapon will require the well-coordinated integration of different technological spheres, including the design of the warhead, propulsion, guidance technology and energetics or explosive characteristics of the weapon.

The Navy is expected to select a contractor to build the VLT in early 2022 and award them with a three-year deal to start building the weapon.