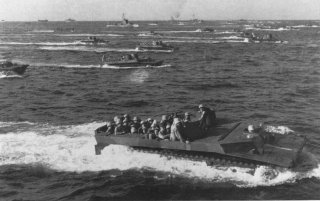 Here's What You Need to Know: One young Marine Corporal, Tony Stein, favored the Stinger. He would be among the first to land at Iwo Jima, where he was posthumously awarded the Medal of Honor for his actions on the volcanic island’s beaches.

During the Second World War, the M1919 Browning Machine Gun was the United States’ standard-issue general purpose machine gun. It fired the powerful .30-06 rifle cartridge, and greatly augmented an infantry unit’s available firepower. Still, the M1919 was a crew-served weapon and required a five-man crew to operate: a commander, gunner, assistant gunner, and two ammunition carriers. The machine gun alone weighed over 30 pounds or 14 kilos, and with a removable bipod, weight ballooned upwards, becoming excessively heavy for a single soldier to operate.

There was however, a lighter version of the M1919. The .30 AN/M2 was a redesigned variant of the M1919 design. The AN/M2 was built for use exclusively on aircraft and had a significantly higher rate of fire. Since it was designed to be used at higher altitudes where air is cooler, the AN/M2 could afford to use a thinner, lighter weight barrel. Overall, the platform weighed less thanks to thinner stamped parts and was in total about a third lighter than its M1919 relative.

In the Pacific, Marines were able to get their hands on the lighter AN/M2 variant by scrounging them from downed or otherwise out-of-commission aircraft. Though these machine guns were not intended for dismounted use, a couple of enterprising Marines realized that the aircraft guns were well-suited to the dense, close-quarters warfare typical of the Pacific Theatre. During the Marine assault on Bougainville, the value of a more mobile, high-firepower package became clearly apparent. It was there that a couple of AN/M2s jerry-rigged into portable weapons.

Initially, the result was rather crude. The spade-style trigger and handle grouping was retained, the only difference being a bipod—likely from a BAR—being attached to the barrel. While this modification was helpful, it was rather ungainly and next to impossible to shoot from a non-prone position.

Further modifications were done to the AN/M2, producing the final, ultimate Stinger. Few of the motley rifles were produced. They mated an AN/M2 receiver to a sawed-off M1 Garand buttstock, a BAR bipod and sights, and a custom-made trigger package. The resulting rifle was staggering in its capabilities.

The Stinger’s rate of fire was its biggest strength but also its biggest vulnerability. Ammunition would be quickly exhausted, and the barrel was prone to overheating, as it was designed to be cooled by cool 300 mile-per-hour winds at thousands of feet in the air.

One young Marine Corporal, Tony Stein, favored the Stinger. He would be among the first to land at Iwo Jima, where he was posthumously awarded the Medal of Honor for his actions on the volcanic island’s beaches. His Medal of Honor citation reads:

“The first man of his unit to be on station after hitting the beach in the initial assault, Corporal Stein, armed with a personally improvised aircraft-type weapon, provided rapid covering fire as the remainder of his platoon attempted to move into position…Cool and courageous under the merciless hail of exploding shells and bullets which fell on all sides, he continued to deliver the fire of his skillfully improvised weapon at a tremendous rate of speed which rapidly exhausted his ammunition.”

Not too shabby for an improvised mish-mash of rifle parts.