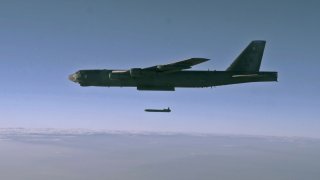 Here's What You Need to Remember: It shouldn't be surprising that the B-52 could be delivering a serious punch to America's adversaries in the decades to come, even if it is being flown by the great-grandchildren of its original crews!

In February the United States Air Force announced that it will transition to a two bomber fleet – made up of the now under development B-21 Raider, and the Cold War era B-52 Stratofortress.

"On the bomber fleet, there's nothing more important to the Air Force," Lt. General David Nahom, deputy chief of staff for plans and programs told the House Armed Services subcommittee on seapower and projection forces. "If you look at what the bombers bring, no one else brings it. Our joint partners don't bring it, our coalition partners don't bring it."

While it is clear that the B-21 Raider will "bring it," the question does remain how the same can be said of the B-52, which are older than most of the crews flying them. First flown in April 1952 – 67 years ago – the B-52s have gone through updates and upgrades and can be further improved to address modern threats.

There are currently 58 B-52 bombers in active service, with another 18 in reserve and another dozen or so in long term storage. The bombers have flown under various commands during those 67 years, beginning with the Strategic Air Command (SAC), until it was disestablished at the end of the Cold War in 1992, when its aircraft were absorbed into the Air Combat Command (ACC). Since 2010, all B-52 Stratofortresses fly under the Air Force Global Strike Command (AFGSC)

Those long-range, subsonic strategic bombers will also remain in service into the 2050s, with some reaching 100 years in service. To put that in perspective that would be akin to the U.S. military still relying on the French-designed Renault FT or FT-17 light tank.

However, there are some key differences. The B-52 is simply up to the job of delivering a massive amount of punch to extremely long distances.

"The B-52 has been able to last as long as it has for a few reasons," said Michael Blades, vice president of aerospace, defense and security at Frost & Sullivan.

"The main issue is its simplicity," Blades told Frost & Sullivan. "Its control surfaces are moved by cables, pulleys, and hydraulics. It is a much simpler system than newer fly-by-wire technologies that are more complex and more difficult, and expensive, to repair."

Blades added that another factor is that B-52s can be upgraded because they are a more flexible airframe – and cheaper to upgrade than stealth aircraft. Then there are the materials.

"Modern aircraft also utilize composites and other materials that are not as easy to replace as sheets of aluminum which is what constitutes the B-52's skin," he explained. "Another factor that has led to the Stratofortess's longevity is its flexibility. It was designed to deliver nuclear weapons over long distances but is just as effective at launching ALCMs, dropping conventional bombs for carpet bombing, or delivering precision-guided munitions for more surgical strikes."

Then there is the fact that like a classic car it could come down to how it has been used. Blades noted that even those B-52s that were built in the 60s do not have amount of flying hours on them than other 60's era aircraft. Many simply sat on alert for many years during the Cold War.

"All in all, the simpler design has been easier to repair, easier to upgrade, and easier to modify than most modern aircraft," said Blades. "Of note, the Boeing KC-135 Stratotanker came into service only a few years after the B-52 and is planned to be in service almost as long. It has been able to endure for many of the same reasons the B-52 has. Both aircraft also benefited from an extended period during the Cold War where both aircraft sat on alert to complete the SIOP mission, and did not amass a high number of flight hours."

Longevity has also been true of the "right" weapons platform. Case in point, John Browning's Colt M1911 .45 pistol is still a weapon favored more than 100 years after its introduction by sport shooters and remains in use with the U.S. Navy today. Browning's M1919 .30 caliber is still used in a limited capacity by militaries around the world, and it was the basis for the M2 .50 caliber is still very much a front line weapon nearly 70 years after it was first introduced.

Therefore, it shouldn't be surprising that the B-52 could be delivering a serious punch to America's adversaries in the decades to come, even if it is being flown by the great-grandchildren of its original crews!