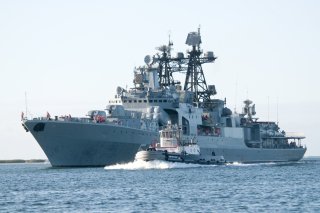 Here's What to Remember: The upcoming warship will not only be twice as large as the country’s Soviet-era destroyers, but substantially bigger than even the three Slava-class guided-missile cruisers currently serving in the Russian Navy.

The largest Russian warship to be conceived since the Soviet collapse, the mysterious Lider-class destroyer promises to revolutionize Russia's surface warfare capabilities.

Reports emerged as far back as 2009 that Russia’s top military brass is mulling a brand new destroyer acquisition. Citing anonymous sources within Russia’s defense industry, Russian news outlets reported in the following year that development work had begun on a next-generation stealth warship. Officials tied to Russia’s shipbuilding industry announced in 2011 that they are seeking to build a modernized destroyer capable of replacing a swathe of older Soviet surface combatants, including the Sovremenny and Udaloy destroyer classes. The ambition was to create an all-in-one solution that combined robust anti-submarine warfare (ASW), anti-ship, and air defense capabilities into one survivable platform. The effort, dubbed  Project 23560 Lider, received tentative approval from the Defense Ministry in 2013, with some defense observers averring that the new class’s lead ship would be laid down by 2020. These optimistic forecasts were dashed in 2017, following reports that the Lider class was dropped from Russia’s 2017-2027 State Armament cycle. Defense industry insiders added that the Russian Navy seeks to channel its limited funds into a lean local defense force focused around modern strategic and cruise missile submarines, as well as small surface ships. But the Vice-President for Warship Construction at Russia’s United Shipbuilding Corporation (USC) Igor Ponomaryov insisted to Russian media sources later that year that the Lider-class project is alive and well. Ponomaryov noted that the destroyer is moving into an active development stage after being greenlit by the Defense Ministry.

The scope of the project was reportedly expanded in 2019, with the designers re-imagining the Lider class as a 19,000 ton, nuclear-powered behemoth that would become the foundation of a modernized blue-water navy capable of projecting power across the world. This means the upcoming warship would not only be twice as large as the country’s Soviet-era destroyers, but substantially bigger than even the three Slava-class guided-missile cruisers currently serving in the Russian Navy. The destroyer’s prodigious size will go toward fielding some of Russia’s latest ship-launched weapons, including the new 3M22 Tsirkon winged, anti-ship hypersonic cruise missile, a naval version of Russia’s next-generation S-500 missile defense system, and the recent Paket-NK ASW/anti-torpedo system. It will also reportedly boast a flight deck that can support several Ka-32 helicopters. The Lider’s gargantuan size, modern firepower, and stealth-focused design place it in a similar performance category to the U.S. Navy’s slightly smaller Zumwalt-class guided-missile destroyers.

USC head Alexei Rakhmanov told reporters in the summer of 2020 that the Lider project is moving forward as planned, with Krylov State Research Center director Pavel Filipov saying earlier that construction work on the lead ship could begin as early as 2023. Still, it remains to be seen whether or not the Kremlin is fully and unanimously committed to funding what would be Russia’s most ambitious post-Soviet surface vessel project to date.

Mark Episkopos is a national security reporter for the National Interest. This article is being reprinted for reader interest.