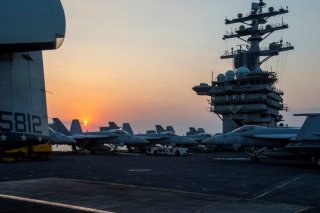 Here's What You Need to Remember: The devil’s in the details, as the old truism puts it. The services now need to deliver on their promises—honing tactical and operational methods, an experimental ethos, and the technology needed to execute their vision.

On Thursday the U.S. Navy, Marine Corps, and Coast Guard—which have taken to calling themselves the Naval Service, singular—released a “Triservice Maritime Strategy” entitled Advantage at Sea. Let’s look at some noteworthy facets of the strategy, the third in a series reaching back to 2007, when the George W. Bush administration was nearing its end.

First of all, Secretary of the Navy Kenneth Braithwaite attached a preface to the document, depicting it as “a strong signal of support for our personnel, our allies, and our partners—and a cautionary warning for any would-be adversaries.” Controversial? No and yes. On the one hand, it’s entirely fitting for the sea services’ political overseer to endorse a statement about how the services view the strategic surroundings and intend to manage them. The brusque tenor of Braithwaite’s commentary, moreover, comports with an incipient age of strategic competition against hostile great powers.

On the other hand, affixing a Trump administration official’s signature to a document meant to guide the services for the next decade could prove to be a political misstep. The uniformed service chiefs bottom-lined the 2007 Cooperative Strategy for 21st Century Seapower, an ancestor of Advantage at Sea. If anyone ever publicly explained why Secretary of the Navy Donald Winter’s name was absent from the 2007 Maritime Strategy, I never heard it. The omission did have the advantage of making the strategy an apolitical document—a major upside considering the White House was destined to change hands fifteen months after the strategy appeared in October 2007.

In all likelihood this was deliberate. Keeping the strategy nonpartisan allowed the Barack Obama administration to take ownership of a Bush strategy rather than jettison it the way presidential administrations discard artifacts from predecessors representing the opposing party.

It appears Secretary Braithwaite will not be in office much longer owing to the upcoming presidential transition. Putting a Trump administration stamp on the Maritime Strategy may consign it to relative oblivion come January 20. This is something to monitor. It’s a good document, and it aspires to mold force design and operations for the coming decade. It would be a shame were it tossed on the ash heap because of who signed it.

Second, Advantage at Sea is remarkable for its candor vis-à-vis prospective foes. For years Chinese Communist officialdom prated on about how Westerners were hyping a “China threat theory,” and how such theories betokened a Cold War mindset in Western capitals. At the same time, China hands in the West cautioned against treating China as an enemy lest it become an enemy. The notion of a “self-fulfilling prophecy” was common currency. Beijing should have heeded this counsel when shaping its own policies. Not that long ago it was hard to rouse Westerners from their apathy toward the Asian giant. Chinese grandees have given life to China-threat theories through a range of actions, from purloining territory from China’s neighbors to revoking Hong Kong’s democratic status to incessantly menacing Taiwan.

Threats are made up of capabilities and intentions. Over the past quarter-century, the People’s Liberation Army (PLA) has assembled formidable capabilities. Beijing scarcely troubles itself to conceal the uses it has in mind for those capabilities. Small wonder the framers of Advantage at Sea portray China as the “most pressing long-term strategic threat” in the nautical domain. Treat America and its friends like enemies and they might become so. The tone of the Triservice Maritime Strategy differs markedly from that of the 2007 Maritime Strategy, which conspicuously—and correctly for the time—avoided naming China as a threat.

Third, the strategy should cheer U.S. allies, partners, and friends. In order to generate “integrated all-domain naval power”—the strategy’s mantra for forces able to concert their efforts at sea, in the sky, on the ground, in orbit, and in the cyber and electromagnetic realms—the Naval Service must work with foreign partners. Indeed, say the framers, alliances and partners constitute “our key strategic advantage in this long-term strategic competition.” This is true beyond doubt. China’s bench of allies and friends is shallow while America’s is deep. Give me Japan, South Korea, Australia, and India as maritime partners any day compared to North Korea and Pakistan.

But fourth, it’s one thing to say we will stand by our allies and deter prospective adversaries. The sea services must put steel and prowess behind resolute words. At its most basic strategy is about setting and enforcing priorities and readjusting them as necessary. Advantage at Sea acknowledges that U.S. resources are finite and scattered about the globe on many errands, whereas Chinese and Russian military resources are largely concentrated in theaters Beijing and Moscow care about most—chiefly those adjoining their shores. The service chiefs vow to make “hard choices,” keeping their priorities straight while merging the sea services into a cohesive national fleet—a single sharp implement of sea power—to the maximum extent possible.

That means putting China first on the hierarchy of strategic competitors while designating Russia as a worthy but secondary competitor. They also warn about the consequences of inaction: “China’s and Russia’s aggressive naval growth and modernization are eroding U.S. military advantages. Unchecked, these trends will leave the Naval Service unprepared to ensure our advantage at sea and protect national interests within the next decade.”

Bureaucracies love lists. Listmania generally sets eyes to rolling, but the Triservice Maritime Strategy proffers a useful set of statements about the strategic environment and how to superintend it:

(a) As noted before, the document describes foreign partners as the United States’ central strategic advantage moving ahead. And indeed they are.

(b) It acknowledges that “activities short of war can achieve strategic-level effects,” pointing to Chinese and Russian “gray-zone” strategies that chip away at neighbors’ interests and the international order bit by bit without provoking open combat. It goes on to pledge to develop “new intermediate force capabilities,” meaning “scalable armaments that can deliver effects short of lethal force,” in order to increase the allies’ “options for responding to provocations and coercion in both competition and crisis.”

(c) It vows to sustain “critical military advantages,” observing that martial superiority grants the stronger contender the option to escalate or deescalate a confrontation. The ability to win in wartime buttresses the ability to deter or coerce in controversies short of armed conflict. It also gives heart to allies and partners, reassuring them that America can honor its commitments to them and has the military means to keep faith.

(d) From time to time U.S. military commanders have toyed with the idea of “virtual presence,” whereby forces surge from bases on U.S. soil to help deter, coerce, and reassure key audiences. Advantage at Sea brooks no such approach. The strategy declares that U.S. forces must be present near potential scenes of action beforehand if they hope to deter aggression. It may be too late to rush to Asian or European battlegrounds after fighting starts. Eighty percent of life is just showing up; staying accounts for much of the other twenty.

(e) It rededicates the maritime services to sea control while also paying homage to sea denial. China and Russia rely on the sea to achieve many of their strategic goals, such as invading Taiwan across the Taiwan Strait. Sea-service leaders hope to command the sea at the outbreak of a conflict; they do not expect to. Fortunately, a force can defeat an opponent’s strategy without defeating opposing forces wholesale. A maritime strategy that denies a hostile navy free use of the sea can balk its aims while allied forces work toward winning sea control for themselves, along with the host of blessings maritime supremacy bestows.

(f) It points out that nautical primacy is not a birthright for the Naval Service. American society, government, and military must make the conscious political choice to preserve and expand their advantage at sea. They must resolve to constantly upgrade forces, doctrine, and tactics to stay ahead of determined and often impressive rivals.

The Triservice Maritime Strategy goes on to sketch some top priorities for force modernization, including a new class of nuclear-powered ballistic-missile submarines at the upper end and a new flotilla of light surface combatants and amphibious transports at the lower end. It commits the services to experiment with unmanned vehicles of all types and contemplates making them an official part of the fleet, alongside traditional crewed vessels. It sketches concepts aimed at dispersing combat power among more, yet smaller and affordable craft—making the fleet more resilient in the face of enemy action. It contemplates using seagoing forces in concert with ground forces to deny adversaries control of the sea and exert it on behalf of the United States and its allies.

And on and on.

Now, it is one thing to develop a strategy document that says the right things, quite another to put it into effect. Advantage at Sea hands readers in the next administration, Congress, and the electorate a yardstick to judge how well the sea services implement the ideas the document puts forth. Senior leaders seem to have embraced the reality that the post-Cold War strategic holiday is behind us and an age of strategic competition is upon us. That’s a major cultural adjustment following three decades when the sea was a safe sanctuary for U.S. marine endeavors.