Will We Be Seeing a Laser Weapon Soon? 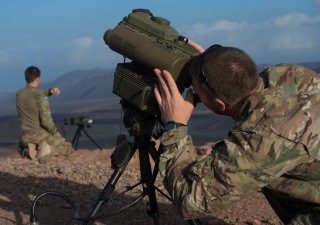 Here’s What You Need to Remember: The two military services are arming small tactical vehicles and some of their larger tactical trucks with precision-laser weapons to help find and incinerate enemy targets without needing to create explosive fragments.

Imagine that an advancing mechanized Army unit is closing with an enemy force on the outside border of an urban area when suddenly a small fleet of enemy drones emerge from behind tall buildings to attack with air-to-ground missiles. Approaching tanks and tactical vehicles in an armored column might suddenly be placed at risk if the drones were not previously detected by any air asset.

This is the type of scenario the Air Force and Army are preparing to confront. The two military services are arming small tactical vehicles and some of their larger tactical trucks with precision-laser weapons to help find and incinerate enemy targets without needing to create explosive fragments. Lasers would provide a more cost-effective long-term solution than current assets.

Much of the innovation has been oriented toward engineering mobile sources of transportable electrical power sufficient to generate and sustain operational effectiveness. Gen. John Murray, the commander of Army Futures Command, says the Army is addressing these challenges and making rapid progress integrating mobile electrical power on combat vehicles.

Prototype laser weapons have been operational for many years now. But emerging technology is changing the type of missions that these weapons can perform. The military services and defense industry companies have been working on software refinements, upgrades and enhancements to improve operational functionality. Part of this undertaking includes using new software to enhance the fire-control interface for the laser. This is something that could be used to increase precision, scale effects or increase power depending upon mission demands. A large truck-mounted laser could provide mobile air and missile defense for units on the move in combat. The high-energy laser could perhaps offer a protective envelope or blanket of defense over a particular operational area, allowing tactical and combat forces to maneuver at lower risk. This will require continued “power scaling” of laser systems and the exploration of newer kinds of mobile-power adaptations to ensure sufficient strength can be compressed into a small enough form factor to bring very substantial firepower to mobile systems such as Army tactical trucks.