World War I: The Infantry Rifle to End All Rifles 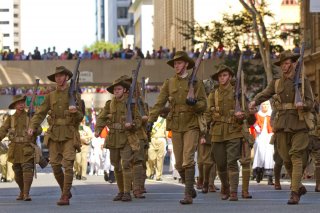 Key Point: World War I is remembered for its technological innovations—it was truly a war of “firsts.” It was the first war to make widespread use of the airplane and the first to see the use of tanks. In terms of small arms weapons had improved dramatically in the hundred years since the Napoleonic Wars and this was noted by the devastating firepower of the machine gun.

However, most soldiers actually carried bolt action rifles—a technology that had been developed less than fifty years earlier and which gave the troops the ability to quickly fire rounds in rapid succession. While slower than today’s automatic or even semi-automatic weapons this was a major step forward in firepower.

Some of the rifles were better than others, but these were truly the “weapons of war” a century ago.

Anyone who knows a thing or two about German military rifles of the past 150 years must certainly know the name “Mauser,” and Mauser’s Gewehr 98 remains among the best bolt action military rifles in its day. It fired the 7.92x57-millimeter cartridge from a five-round internal clip-loaded magazine. It first saw use in combat in the Chinese Boxer Rebellion and even after the end of World War I remained in use until 1935 when it was replaced by the Karabiner 98k, a shorter version that utilized the same basic design.

The Gew 98 featured a controlled-feed bolt-action, which was considered among the best bolt-action systems of era. The rifle also had an effective firing range of five hundred meters with iron sights and a rate of fire around fifteen rounds per minute. As with most of the rifles designed in the nineteenth century, it offered the range and stopping power but lacked the necessary rate of fire for this new modern warfare.

When World War I broke the French were wearing a uniform that consisted of red trousers and a heavy dark blue coat—and as such looked little different from those who marched off to war during the Franco-Prussian War of 1870–71. The soldiers were armed with Lebel Model 1886 or “Fusil Mle 1886 M93,” which was vastly improved over the Chassepot or “Fusil modèle 1866,” but the Lebel was already more than twenty-year-old at the outbreak of the war despite undergoing a bolt modification in 1893.

The big advantage of the Lebel design was that it had a ten-round capacity that included eight rounds in a barrel tube magazine, along with a round in the transporter and one in the chamber. Yet, as with other French rifles of the era, it had no manual safety–so except when going into combat, it was carried with just nine rounds. The other downside was that it was slower to reload as each round had to be loaded one at a time. The Lebel had an effective range of four hundred meters, and a maximum firing range of eighteen hundred meters making it a good weapon in the trenches.

After the ubiquitous AK-47 no weapon was as widely employed at the British Lee-Enfield. The weapon was actually a redesign of the Lee-Metford, which was first adopted by the British in 1888. Just seven years later the Lee-Enfield—which took its name from the designer of the bolt system, James Paris Lee, and the factory where it was designed, the Royal Small Arms Factory in Enfield—became the main firearm of the military forces of the British Empire and Commonwealth. It was refined in 1904 as the Short Magazine Lee-Enfield (SMLE). The short referred to the size of the rifle, not the magazine.

The SMLE MkIII was introduced in 1907, along with the Pattern 1907 bayonet, and it featured a simplified rear sight. The rifle’s main advantage was its ten-round removable magazine, which offered a rate of fire of twenty to thirty aimed shots per minute. The effective range was five hundred meters and its maximum range was twenty-seven hundred meters. The SMLE was still at the outbreak of World War II and a simplified version, the No. 4 MkI remained in use during the Cold War as well.

The British weren’t the only ones to see such notable longevity with their main service rifle. The Russian Empire adopted the Mosin-Nagant in 1891and it is still encountered in Syria, Libya and other distant battlefields.

The original M91 version saw use through World War I, and was only modified by the Soviets as the M91-30, where it saw service in World War II and into the Cold War. In total, more than thirty-seven million Mosin-Nagant rifles were produced.

The M91 version first saw use in the Russo-Japanese War, and despite the eventual proliferation of the rifle it was actually in short supply during World War I—to the point that Remington was contracted to produce the rifle in the United States. While some 470,000 rifles were delivered, the October Revolution resulted in the downfall of the Russian government and the new Bolshevik regime under Vladimir Lenin refused to pay for the weapons. Some 280,000 were subsequently sold to the United States Army and ironically used by those American and British troops that were part of the expeditionary force of the North Russia Campaign to support the anti-Bolshevik forces.

The original Russian versions were chambered in the 7.62x54-millimeter Russian cartridge that was later used by the Soviet Union and Warsaw Pact nations in subsequent rifles and machine guns. The Mosin-Nagant utilized a five-round non-detachable magazine and it had an effective range of five hundred meters.

During the Spanish-American War, the U.S. Army was equipped with the Springfield Model 1892–99 Krag–Jørgensen, a rifle that did the job but was clearly outclassed by the Spanish M1893 Mauser. Seeing the advantages that the Mauser offered the American military copied the basic design and the result was the M1903 Springfield, chambered in .30-06. The Springfield was the standard infantry rifle at the time of America’s entry into the First World War, and it stayed in that role until it was replaced by the M1 Garand in the late 1930s.

The U.S. Army did see the benefits of a semi-automatic firearm much earlier, however, and this resulted in the development of the Pedersen Device, a specialized insert that replaced the bolt and allowed the rifle to fire .30 caliber pistol rounds semi-automatically from a forty-round detachable magazine.

The Springfield M1903 had a rate of fire of ten to fifteen rounds per minute, and it held five rounds in an internal box magazine. Its effective range was around nine hundred meters while its maximum range was five thousand meters.