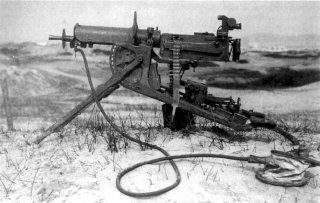 What a difference 100 years made in the course of war. When the armies of Europe faced each other on the battlefields across the continent during the Napoleonic Wars, soldiers could successfully fire three to four rounds a minute.

During the First World War, millions were killed and one invention had changed warfare forever—the 1884 Maxim Gun.

Sir Hiram Stevens Maxim was an inventor who held numerous patents—including for a mousetrap, hair curling iron, and various steam pumps. Maxim even laid claim to inventing the lightbulb and also experimented with powered flight. Yet it was his gun design that the American-born, British inventor is now most remembered for. As the story goes, he was told if he wanted to make a "pile of money" he should "invent something that will enable these Europeans to cut each others' throats with greater facility."

The concept of a machine gun came to Maxim when he was knocked over by the recoil from a rifle, and his design employed the earliest recoil-operating firing systems. The concept remains in use today, where the energy from the recoil on the breech block is used to eject a spent cartridge and insert the next one. The Maxim design could fire 600 rounds per minute, allowing a lone soldier to have the firepower of an entire line of troops. The Maxim gun was introduced in 1883 and used by the British Army in numerous colonial campaigns.

But it was Germany that saw the potential in the weapon.

The German adaptation resulted in the Maschinengewehr 08 (or MG08)—named for 1908, the year of its adoption. Like the original Maxim, it was a water-cooled machine gun that had a jacket around the barrel, which was filled with water to keep the weapon from overheating.

The MG08 was produced at Deutsche Waffen und Munitionsfabriken (DWM) in Berlin and by the government at its Spandau arsenal—the latter fact resulting in some describing it as a Spandau machine gun, but the official moniker was still simply MG08. Prior to the outbreak of the First World War German factories produced some 200 of the machine guns a month, and had some 12,000 of the machine guns available and in the ranks when the war broke out in August 1914.

It didn't take long for the weapon to prove its worth, and Germany factories increased production. By 1916 the number produced each month increased to 3,000 and a year later some 14,400 were being produced monthly.

The MG08 was issued with a heavy "sledge" or "sled" mount—officially the "Schlitten 08." Along with the nearly sixty-pound gun, the MG08 unit weighed nearly 140 pounds and that's not counting the water can or boxes of ammunition. While it is easy to look back on this as cumbersome and heavy, and it is true it took a team of four (at least) to move the weapon, overlooked is the fact that the sledge also included extra barrels, tools and even oil containers that were affixed to it.

This was German efficiency at its finest. It ensured that nothing could be forgotten or misplaced as it was literally attached to or carried on the sledge mount. Moreover, the sledge could be folded flat and two soldiers could carry it like a stretcher while the other two carried the water can and ammunition boxes.

The Germans adopted a number of smaller portable tripods, which allowed the gun to be moved forward without the sledge, but that still required one soldier to carry the weapon while another carried the tripod. The troopers had to stop to set up the gun, which was a dangerous proposition while in no man's land.

The Spandau factory, under the direction of Colonel (Oberst) Friedrich von Merkatz, developed a new version of the weapon in 1915, which became the MG08/15. It featured a pistol grip instead of the traditional "spade grips" at the back of the weapon. It had a short rifle-style butt stock and a bipod. While it was still watercooled it reduced the weight considerably. It could still be fired from a belt fed from an ammunition box, but a special "belt drum" magazine could be mounted on the side, which meant a team of two men or even a lone soldier could successfully move forward with the weapon.

By the end of the war, the MG08/15 became the most common German machine gun deployed across the front lines, and despite material shortages the German Army reached its goal of full allocation of six guns per company, or seventy-two weapons per regiment. More than 130,000 of the MG08/15s were manufactured.

An air-cooled version, the MG08/18 was also tested in small numbers in the final year of the war. It featured a changeable heavier barrel to address the issue of overheating, but proved to be too complicated to change quickly in the field. However, it proved to be a solution that was later adapted with Germany's MG34 and MG42 general-purpose machine guns.