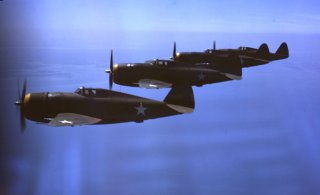 Here's What You Need to Remember: The 56th, better known as Zemke’s Wolfpack after its legendary first ace commander, was the only unit in the strategic-bombing-focused 8th Air Force not to trade its Thunderbolts for P-51D Mustangs, a sleeker and more agile (though less robust) fighter.

This first appeared in January 2019 and is being reprinted for reader interest.