Would America's Aircraft Carriers Be in Danger During a War With Russia or China? 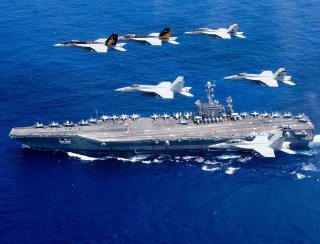 Key Point: Aircraft carriers are very powerful, but they are also vulnerable to attack and costly to lose. They might not be out of date yet, but America will need to be careful with them in the next major war.

Aircraft Carriers, specifically American aircraft carriers, seem to be taking quite a thrashing these days in the press. Some claim they are old and obsolete—no better than all of those expensive Battleships at the end of World War II—destined for the scrapper. Others argue they are undefendable, thanks to the proliferation of ballistic and cruise missiles all over the globe—heck, even non-state actors can get their hands on such weapons these days. Some say they are just too expensive, in fact, the most costly weapon of war serving in not only the U.S. military arsenal but in any armed forces on the planet today—ripe for cutting in an era of lean defense budgets.

But is the era of the flattop really over?

Looking at the headlines, and with no context provided, one could easily argue U.S. carriers are actually more vital than ever. They have been a critical component of almost every major combat operation going back to World War II and form of a big part of today’s kinetic actions against the Islamic State as well as provide important deterrent value—just recently Washington sent two carriers in a show of resolve to the South China Sea. America’s Presidents don’t ask where the carriers are when a crisis is brewing for nothing.

But here is where things get tricky. What happens when a big international incident breaks out against a major, great-power competitor such as Russia, China or even Iran, who have the capability to fire massive amounts of long-range anti-ship weapons at American flattops? It's easy to send a carrier against ISIS or an enemy who simply can’t fire back. What happens when that's no longer the case?

There is where things get even trickier. The most obvious solution would be just to get out of the way—essentially launch your attack aircraft from well out of the range of such missiles, avoiding the problem all together. Unfortunately for Pentagon planners, this is not an option anymore as U.S. planes simply can’t fly at the ranges needed. In fact, in the event of armed conflict with a great-power competitor—especially Russia and China—U.S. carrier battle groups would be showered with missiles, so many that Aegis missile defense platforms would simply run of interceptors in many combat situations, leaving the carrier and its support vessels open to attack.

The problem described above is arguably at its worst in the Asia-Pacific, thanks to the rise of what can easily be described as the most advanced missile program in the world, carefully developed over decades in China—a challenge that is getting worse by the day for American naval planners. Indeed, a recent report from the Center for a New American Century (CNAS) demonstrates the challenge quite clearly, but with a new and even more dangerous twist—China’s island building in the South China Sea has only compounded the problem:

“One development that complicates efforts to determine the threat to the carrier air wing at various distances stems from China’s recent island-building campaign in the South China Sea. Beginning in early 2014, China accelerated its efforts to construct artificial landmasses capable of hosting an array of port facilities, airstrips, and other military structures in the contested Paracel and Spratly Islands. In the event of a conflict, China could deploy A2/AD capabilities from a number of islands in this region – two of which, Woody Island in the Paracels and Fiery Cross Reef in the Spratlys, feature runways that can accommodate UAVs, fighter aircraft, and bombers. Indeed, China has already demonstrated both the interest and the ability to deploy such capabilities on the islands, moving advanced J-11 fighter aircraft to Woody Island in late October 2015 and HQ-9 SAMs in February 2016.

While deploying A2/AD capabilities from the islands would significantly extend their reach – potentially enabling China to strike targets as far as Australia – it would additionally provide a clear targeting opportunity for U.S. forces and likely present only a brief threat to the carrier. If paired with the construction of hardened aircraft shelters and the permanent deployment of SAMs, however, these capabilities could present a more survivable and enduring threat.”

As the report notes, China’s new facilities are certainly open to attack, but that presumes Beijing has not already made the decision to fire first—something Chinese planners would be tempted to do considering the advantages in a crisis of making such a call.

But isn’t there a simple solution to all of this? Why not build an aircraft that can outrange Chinese, Russian or Iranian missiles? The ideal would be an aircraft that can travel at least 2500 miles, hit its targets, loiter at least for a short amount of time, and come back to the carrier. Why 2500 miles you ask? That is the possible maximum range of China’s new DF-26, or second generation carrier-killer missile. However, when one considers the fact that America has already spent billions on a navalized version of the F-35 with a likely operational maximum range of 550 nautical miles and that it would take at least a decade to develop such a fighter—if the money and sheer political will could be found, a tall task for sure—at least in the short term to medium term, America’s carriers will be outranged and under a high degree of risk for years to come.

So is the era of carriers dominating the high-seas over? As Dave Majumdar reported recently, and has been said in this and other publications, thankfully hitting a carrier on the open seas travelling at a good rate of speed is not an easy task. But maybe the real question is this: Would a sitting U.S. President really risk thousands of American sailors lives knowing the threat? What does that say about the state of the deterrent value of an American carrier? Food for thought.