Yes, China Does Have Anti-Satellite Missiles 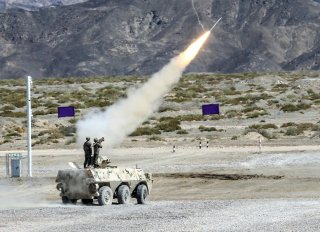 Key Point: The U.S. military needs satellites for GPS and communications. That is why the Space Force exists.

China has conducted several anti-satellite strikes. This capability has been compared to hitting a bullet with a bullet—but should the world be worried?

The United States, and the whole world really, is dependent on space. Satellites are used for GPS locating, for data transmission—for guiding precision munitions, and for photo-reconnaissance.

As one expert wrote, “the military applications of ASAT missiles appear fairly obvious. China would seek to use the ASAT missiles to knock out U.S. satellites in order to degrade its C5ISR [Command, Control, Computers, Communications, Cyber, Intelligence, Surveillance and Reconnaissance] capabilities, rendering distributed U.S. military and allied assets unable to communicate or share information.”

If enough satellites were taken out in the event of war, troops would have to dust off a compass and map.

One of China’s more notable anti-satellite test occurred in 2007. A Chinese satellite was struck and destroyed by a kinetic kill vehicle, resulting in a large cloud of debris being thrown into space—more than 3,000 pieces.

This was a huge technological feat for China. The interceptor that was launched was traveling at nearly 18,000 miles per hour—blindingly fast. The target itself was a mere six feet or so across.

Unlike other anti-satellite tests which hit targets from above, essentially pushing them down towards the earth where pieces burn up upon reentry, this Chinese test was conducted form the side, spewing debris across a swath of space. Many of those pieces will stay in orbit for decades, if not centuries, orbiting the earth and posing a threat to whatever may lie in their path.

According to a United States Department of Defense report, the vehicle that carried the kill vehicle was possibly a modified DF-21 ballistic missile, which is capable of carrying nuclear warheads.

China has conducted several other anti-satellite tests after their infamous 2007 strike, some of which had the potential to be extremely dangerous.

In 2006, Chinese a Chinese laser (or multiple lasers) lit up a number of American satellites. The satellites sustained no damage, indicating that the laser was not operating at full strength, or that the lasers were for determining range rather than for destruction. It remains unclear what purpose these lasers served.

In 2008, China completed its first manned spacewalk. One of the ambulating astronauts released a microsatellite—weighing 40 kilograms, or nearly 90 pounds—into space. Four hours after release, the satellite came about 27 miles from hitting the International Space Station, according to calculations by the U.S. Strategic Command.

While that doesn’t sound so dangerous, the satellite was traveling about 17,000 miles per hour. Needless to say, the space station would have been pulverized and anyone onboard would have likely died. Worryingly, shortly after launch, Chinese state media reported that the micro-satellite had drifted out of its intended orbit.

Anti-satellite weapons are dangerous, yes. But, they are no silver bullet. In the event of a conflict where space would become weaponized, striking satellites could knock out services like GPS or communications networks—for a time. Satellites are getting easier and cheaper to launch. They are replaceable.

What is more dangerous about anti-satellite strikes is the debris field that is created after a hit. Small pieces of metal flying through earth’s orbit at 18,000 miles an hour would be very difficult to track, and even harder to predict. The chance of a strike causing damage to whoever shot it can’t be ruled out—and may actually help to prevent anti-satellite strikes from being used.