Yes, Russia Is Working on a New Stealth Helicopter 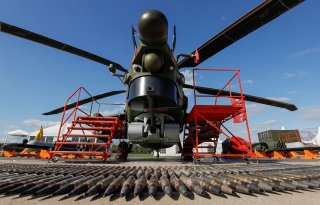 Key Point: Moscow is trying to ensure its military in on the cutting-edge. Can a new helicopter help them do that?

Images surfaced a while back of a new helicopter-jet hybrid from the Kamov helicopter company. Kamov previously designed the highly capable KA-50 and 52 families, both of which are robust, sturdy helicopters. This next airframe, which is likely just a prototype—if it exists at all—has several odd features.

Like the KA-50 family, this new edition would also have two prominent contra-rotating propellers. This design has several advantages over traditional helicopter designs that have a single main rotor and a smaller tail rotor. Without a tail rotor, more power is available to the main rotors, potentially increasing power and maneuverability.

Just below the rotors are two large engine air intakes—which are huge by helicopter standards. These are presumably for jet engines, possibly indicating the high speeds the prototype is designed for.

One of the features that Russian designs like are side-by-side pilot cockpit layouts. This new number is no exception. It is possible that the new Kamov design will also share the KA-50’s pilot ejection system, which can launch both pilots to safety at virtually any speed or altitude.

This prototype also has a large delta wing and canards, like the venerable Saab design, which is highly maneuverable. Canards provide a bit more lift and also help maneuverability. Though there are some issues—perhaps irreconcilable differences—between prominent canards and a stealthy design.

Canards aside, the Kamov design appears to have stealth bomber-style bomb bays for housing munitions internally. With munitions stored internally rather than externally, the prototype would have a “quieter” radar signal, and thus be stealthier.

Despite the various design features clearly aimed at reducing the helicopter’s radar signature, there is one (in this case two) big hurdle for any helicopter trying to be more stealthy: helicopter blades are really unstealthy. They provide a big target for radar to bounce off of, and there is not really an easy way around this.

Kamov did really well with the KA-50 and KA-52 helicopters. Both variants are robust and extensively protected from small arms fire and even larger caliber guns. The six blades are made out of composites and are designed to withstand multiple hits from small arms fire.

The new prototype has some features like the Sikrosky Raider, including possibly stealthy characteristics and, of course, the double rotor system, though the Raider has a pusher propeller, whereas the Kamov prototype has jet engines and both designs clearly place a premium on speed.