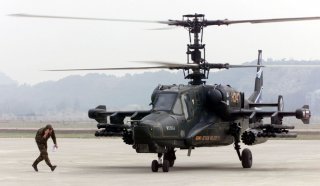 Two is Better than One

Rather than a main blade rotor and a tail rotor assembly, the KA-50 forgoes the tail rotor for another main rotor. These two main rotors spin in opposite directions and give the KA-50 a very high degree of maneuverability and performance when compared to typical tail-rotor helicopters.

The KA-50 is also one of the few helicopters with a pilot ejection system. Like most jets, the KA-50 has rocket or explosive-assisted seats. Prior to ejection, the helicopter’s rotors blades are destroyed and thrown away from the KA-50 frame by integrated explosives. The helicopter’s canopy is then hurled outward and the pilot or pilots are ejected to safety.

In addition to relatively large winglets that can carry a variety of air-to-surface missiles, the KA-50 also has a large 30 millimeter cannon affixed to its right wing. Though the cannon is not free-turning, as on other attack helicopters, it benefits from improved accuracy.

Substantial armor protects the KA-50 from ground fire. The pilot canopy is designed to withstand 12.7 millimeter hits, and the cockpit provides protection from 23 millimeter rounds. The rotor blades are made of a composite material, and can withstand several hits from automatic weapons fire.

A naval variant of the KA-50 was intended to fly on the Mistral-class amphibious assault ships Russia ordered from France. This variant is a two-seater, and has anti-corrosion properties and inwardly-folding rotor blades for compact storage.

In response to the 2014 Russian annexation of Crimea, the tender was canceled and the Mistrals were never delivered. The Mistral-class can carry around 16, possibly as many as 30 helicopters, depending on the airframe’s size and weight.

Following the failed bid, France sold the Russian-intended Mistrals to Egypt. Ironically, Egypt will likely equip its Mistrals with a KA-52 naval variant from Russia.

In 2017, a KA-50 variant, the KA-52, was involved in a live-fire accident during Russia and Belarus’ massive 2017 Zapad military drills, which included 12,000 personnel and hundreds of aircraft, tanks, and other vehicles.

Video footage from an onlooker’s cell phone showed two KA-52s approaching a group of people and mix of civilian cars and military trucks. In the video, one of the KA-52s fired what appears to be two rockets towards the group, striking the foreground in front of the people.

While there were no fatalities, several people were reportedly injured and the military-style truck lost at least one wheel and appears to sustain damage to its suspension.

Another video surfaced online which appeared to be a recording of the pilot’s helmet-mounted display. In the video, a targeting reticle appeared to target the military-style truck. After firing, the pilot appeared to quickly lift the nose of the KA-52, possibly confirming the incident’s accidental nature.

Depending on how Egypt plans to employ their Mistrals, the KA-50 may end up seeing some action in the Middle East. We’ll see.