You Can Trust Your Life to the FN 509 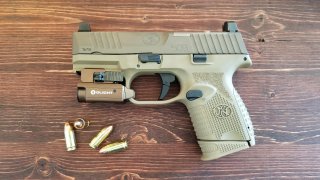 Here's What You Need to Know: The FN 509 Compact MRD checks every box for a defensive pistol. It’s incredibly reliable, offers decent accuracy, and is small enough to conceal yet big enough to shoot comfortably.

The FN 509 Compact MRD is a tiny, accurate, and very reliable handgun meant mainly for home defense and concealed carry. Throughout thousands of rounds, I’ve never experienced a single malfunction, a very important selling point for a defensive pistol. It’s incredibly reliable, and definitely something I would trust my life to.

The Compact MRD comes with FN’s signature Low-Profile Optics Mounting system, meaning the standard black front and rear sights are mounted at suppressor-ready height. It also features a three-slot Picatinny rail, which is big enough to accommodate a slide-mounted optic or standard weapon light. The MRD, or “mini red-dot,” in the pistol’s name means that it’s red dot ready, and the low-profile system allows you to mount one directly on the slide for a more reliable shot. From twenty-five yards, my average five-shot group was just over three inches, which is more than accurate enough for a defensive pistol.

The MRD is made with a polymer frame and is available in your choice of black or FDE coloring. It also features a rounded, aggressively serrated grip for control in all situations. It’s very comfortable to hold, and helps the handgun to handle and shoot well. In the box, you’ll find two interchangeable backstraps—one flat, and one arched. There’s a very small size difference between the two, so it’s up to you to decide which you prefer.

There are also two magazines included with the pistol, a twelve-round version with a finger-hook extension and an extended fifteen-round version that features a grip sleeve. If you live in a restrictive state, FN also has ten-round magazines available. And, if fifteen-rounds simply won’t cut it for you, you’ll be happy to hear that it’ll accept any 509 magazine out there, including twenty-four-round versions.

One upgrade that FN made to this pistol is the trigger. It’s been reshaped to have a flatter face, which gives the user more control and alters the direction of the press, offering more consistent accuracy and a cleaner break. It is a heavier-than-average pull, around 6.5 lbs, but offers a clean, crisp break and a positive reset. As far as safety is concerned, FN has really excelled. They’ve included four safeties, with only the trigger safety lever visible from the outside. Internally, there’s a striker block, drop safety, and trigger disconnect safety.

With a 3.7-inch barrel, the MRD is 6.8 inches long overall. It’s not as small as something like the Ruger LCP, but still a good size for concealment. It weighs 25.5 oz, but this extra weight really helps to soak up recoil for quick follow-up shots. It sells for around $800, and this price includes the two backstraps, two magazines, a locking device, and a carrying case for more protection in storage.

Overall, the FN 509 Compact MRD checks every box for a defensive pistol. It’s incredibly reliable, offers decent accuracy, and is small enough to conceal yet big enough to shoot comfortably.