You're Dead: Stealth F-22s and F-35s Are Teaming up in Real-Life War Games 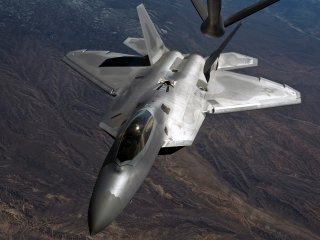 Here's What You Need to Know: Flying F-22s and F-35s in tandem as part of a larger-scale force brings some cutting-edge technologies together.

(This article first appeared in August 2020.)

The Red Flag exercise, happening this year in Alaska, replicates the kinds of high-end, high-risk threats and operations likely to be encountered should there be massive, major-power warfare.

Attack tactics, defensive maneuvers, suppression of enemy air defenses and advanced air-to-air combat are all part of the Red Flag exercise, which this year is adding more F-35s to the fight and, for the first time, flying a “four ship” combat formation.

“This is the first time we have flown four aircraft together and we are combining the other F-35s and F-22s to make a large force exercise,” Lieutenant Colonel James Christensen, 356th FS wing commander said in an Air Force report.

Combining fifth-generation attack tactics in this respect represents several substantial moves forward when it comes to anticipated future threat scenarios. F-35s share a common data link to one another such that they can hand-off targets, share intelligence information and coordinate joint attacks. Therefore, having four operating in tandem enables more attack possibilities.

The data link can also enable F-35s to disaggregate and integrate to cover wider swaths of threat areas and minimize the risks of flying in a close-in cluster, which might make them more vulnerable to enemy fire and also possibly more detectable to enemy air defense radar.

It’s called Blue Team-Red Team wargaming, except it is not a tabletop or computer simulation, but rather a full-scale combat activity across a 77,000 square mile area in Alaska.

Blue Team, or friendly forces, engage in war scenarios against an assembled Red Team of adversary forces comprised of advanced threat-representative enemy weapons, airplanes and air defenses. In recent years, the exercise has become increasingly multi-domain, incorporating cyberwar, electronic warfare and even some Space threats. The pilots have also trained to operate in a GPS-denied environment.

“They (The Red Team) can give us realistic threats, jam our communications, jam our navigation systems and they can give us these problems that I want my young wingmen and my experienced flight leads to experience,” Christensen said.

Also, flying F-22s and F-35s in tandem as part of a larger-scale force brings some cutting-edge technologies together. While these fifth-generation aircraft have often trained together, emerging technology allows F-35s and F-22s to engage in two-way LINK 16 data link communication.

This enables the two aircraft to coordinate target information, share vital data, function as network “nodes” and optimize joint attacks. Historically, an F-22 could only engage in one-way LINK 16 connectivity with F-35s. That has changed, creating a scenario wherein aircraft can communicate in a more secure fashion without having to rely upon radio. This is quite significant, in part because it might better enable connectivity in the event that interference, electronic warfare attacks or some kind of jamming disabled radio communications.