The 9/11 Fallout: Afghanistan's Taliban Hold the Key to an Exit Deal 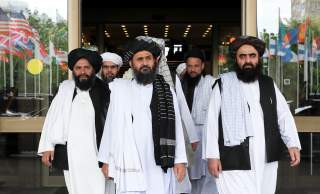 Today is the eighteenth anniversary of the dark terrorist act that wounded America and spawned the war in Afghanistan which has continued, without pause or purpose, since that awful day. This past weekend, President Donald Trump canceled a year-long peace effort between the U.S. and the Taliban, a project advocates claimed could end the war. Whether or not that claim was overblown, the talks Trump shut down handed unwarranted strategic power to the Taliban. It is time now to take that power back.

We must immediately end this war with a rapid and prudently executed military withdrawal on terms we issue. Secretary of State Mike Pompeo insists that “real peace” in Afghanistan “will come when the Taliban stop killing Afghans and implement a ceasefire.” It is true that intra-Afghan negotiations will be necessary for a lasting peace, but predicating the end of U.S. involvement on assurances from the Taliban is akin to building a house on shifting sand. It all but guarantees the war will continue indefinitely.

Though it is a distasteful reality, we must honestly acknowledge that the Taliban will not disappear from Afghanistan for the foreseeable future, particularly after they withstood then-President Barack Obama’s 2010–11 surge. The Taliban cannot be forced into an agreement that they don’t want, and Washington cannot allow the Taliban to thus obstruct our exit. It would be foolhardy to base any outcome on trusting the Taliban to keep promises. Though they have a tactical military advantage on the ground in Afghanistan, we still hold the more powerful strategic cards.

The most logical, strategically sound decision at this point—and the one that can be successfully accomplished—is for the United States is to unilaterally declare an end to the war and conduct a full military withdrawal. This can and should be conducted on our terms, on a timeline of our choosing, irrespective of anything the Taliban may do or say. The days of begging the Taliban to cooperate should come to an immediate and permanent end.

Unfortunately, most of establishment Washington is stuck on the playbook that has manifestly failed us for eighteen straight years: hoping our military can somehow force the Taliban to concede a favorable outcome. This naive approach should have been rejected more than a decade ago.

The standard argument is that we “can’t” withdraw from Afghanistan without a genuine peace deal because—as Sen. Lindsey Graham often says—it would “lead to another 9/11.” A careful examination of the evidence, however, refutes this spurious claim.

I’ve observed that evidence first-hand through direct combat experience in Afghanistan and two-plus decades of military service. That record has categorically convinced me the U.S. Armed Forces will never be able to wrench a military victory out of Afghanistan nor compel a negotiated peace. On the contrary, it is clear to me that our continued military presence in Afghanistan does nothing to safeguard us from future attacks—and indeed distracts from effective counterterrorism tactics we should pursue instead.

A few characteristic examples of what I observed on the ground in Afghanistan over my two combat deployments, from 2005 to 2006 and 2010 to 2011, will make my thinking clear. These stories capture in microcosm why full military withdrawal is the only way to end this foreign policy disaster.

My first deployment to Afghanistan started in March 2005, when I served as a liaison officer between my organization, Combined Forces Command Afghanistan (CFCA) and our higher headquarters, Central Command (CENTCOM). I spent most of my time in the CENTCOM command centers at MacDill Air Force Base, Florida and Al Udeid Air Base, Doha, Qatar, with the rest in CFCA’s headquarters in Kabul, where I monitored daily combat reports throughout Afghanistan.

Just before the end of that first combat tour in early 2006, I accompanied a contingent of American military and diplomatic officials to an Afghan police station near Mazer-e Sharif in the northern part of the country to celebrate their newest class of police graduates. Americans had been training Afghan soldiers and police for two years at that point, and we promoted the success of the class as representative of the future of a free, independent, and prosperous Afghanistan—and our ticket out of the country. That didn’t seem like a fantasy at the time.

Following the ceremony I went with a group of State Department officials and Army troops to visit the bazaar near the center of town. We drove from the police station in a regular, unarmored truck, without body armor, and armed only with my pistol.

We went through the ancient streets and shopped for our friends and family back home without any fear of danger from the local population. We were even accorded the honor of viewing the inner courtyard of the famous Blue Mosque, built in 1481. I would never again see such relative peace on the ground in Afghanistan. When I returned five years later, I was shocked at how bad security conditions had become.

Over the course of my 2010–11 combat deployment I traveled over nine thousand miles, conducting foot patrols, mounted patrols, and helicopter reconnaissance, and interviewed more than two hundred soldiers. I may have had the most uniquely comprehensive view of the war of any American in Afghanistan.

In June of 2011, my travels brought me to the Zharay district of Kandahar Province in southern Afghanistan, where I accompanied a platoon of a combat company, 1-32 Infantry Regiment on a foot patrol to a building complex that had just been captured from the Taliban the night before.

The building complex we were to convert into a defensive position was still seeded with an unknown number of improvised explosive devices (IEDs) the Taliban had planted before being driven from the area. The heat was unbearable that day, spiking to 116 degrees by mid-afternoon. Upon arrival, the American unit did exactly what they were trained to do: work to clear the area of IEDs, build machine gun positions, and prepare defensive works throughout the complex.

While the U.S. troops labored in the heat, every Afghan National Army (ANA) trooper went straight to the shade in one of the bombed-out rooms. Many took a nap. They were all content to let the Americans do the hard work. Unfortunately, that was the least of the bad ANA performance I would observe.

Towards the end of the day, I climbed aboard an armored vehicle and was taken back to the unit’s command post about a twenty-minute drive to the east. As I dismounted the truck and prepared to enter the compound, the sound of gunfire rang out. It was coming from maybe five hundred meters away. I made my way into the headquarters, where the commander was watching the situation unfold via a high definition camera system hoisted high above the camp.

Two Taliban fighters had stumbled into an American outpost and briefly exchanged gunfire before trying to flee on a motorcycle heading toward an intersection up the road where ANA soldiers inside armored Humvees were standing guard.

When the U.S. commander realized where the fighters were heading, he wheeled around and shouted an order to his Afghan interpreter to jump on the radio and warn the Afghan patrol to be ready to intercept the riders. The warning was met with silence. Again, he motioned to make the radio call. Again, silence. We watched as the motorcycle got closer and closer to the checkpoint. Still only silence from repeated radio calls.

As the Taliban fighters came within visual range of the ANA vehicles, we watched in stunned silence as the motorcycle simply continued past the vehicles at a leisurely pace. After the fighters were out of sight over a hill, the radio suddenly came to life: “Yes?” said the senior Afghan soldier at the checkpoint. “Did you call?” The U.S. commander was stunned that the very Afghan troops he had been training and fighting alongside could so brazenly cooperate with the enemy.

August of 2011, I went to visit troops at another outpost in Kandahar Province, this one within the Arghandab River valley. Troopers from the Alaska National Guard had been given a mission similar to that of the unit I had visited in June, but they had to cover with a 120-man infantry company the same area previously handled by a full six-hundred-man battalion. The company commander—I’ll call him Cpt. Stevens because he did not authorize me to use his name—was discouraged when I got there.

The local population did not trust Stevens and his troopers. “When we got here,” Stevens told me, “we killed a bunch of bad guys, especially the local enemy leaders.” But the new leader the Taliban sent to replace the one Stevens’ men had killed turned out to be more skilled at making bombs. “Overnight we saw a significant increase in the quality of the IEDs,” the commander continued. “And there are massive numbers of them around here. Last week we lost three Stryker vehicles and had seven guys step on pressure plate IEDs.”