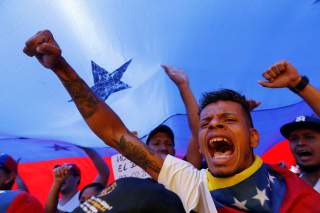 Venezuela has been in crisis for years. Now President Donald Trump has made Venezuela’s problems America’s problems.

Two decades ago Hugo Chávez successfully challenged a collectivist, kleptocratic political system which enriched the country’s elite. But he created a quasi-dictatorship staffed by Cuban security agents and wrecked the economy by imposing real socialism and handing control to corrupt apparatchiks. Chávez even destroyed the state petroleum company by turning it into a lucrative source of patronage.

The situation deteriorated further under Chávez’s successor, President Nicolás Maduro. Today both food and medicine are increasingly difficult to find. Even Venezuela’s poor, who propelled Chávez into power, have given up on his bungling, charisma-challenged successor.

Last year President Trump threatened to invade Venezuela. He backed down, but recently launched a vigorous campaign for regime change through diplomatic and economic pressure. America’s great hope is in opposition leader Juan Guaidó, President of the National Assembly, who declared himself to be Venezuela’s legitimate president. If Guaidó’s campaign fails, war remains “an option,” declared the president.

That might be a bluff, intended to intimidate Maduro and his supporters. However, if President Trump is serious, the consequences could be disastrous for both Venezuela and the United States.

The former is a tragedy on multiple levels. Like many Latin American political systems, it long enshrined great economic injustice. In 1992 Lieutenant Colonel Hugo Chávez staged a coup. Despite some popular support it failed and he was imprisoned. But he was soon pardoned and in 1998 was elected president, serving until his death in 2013.

Vice President Maduro replaced Chávez, but the Maduro lacked any hint of charisma or competence. The economy was cut by half over his six years in power and is expected to shrink another quarter this year alone. The latest annual inflation estimate—the regime stopped releasing economic statistics—is an incredible 1.7 million percent. Nine out of ten people fall below the poverty line. Stores are empty. Every day 80,000 people cross into Colombia seeking provisions. An expectant mother turned border street vendor explained: “in Venezuela there is nothing.” Yet President Maduro rejected offers of humanitarian aid, insisting that there is no crisis and “we are not beggars.” So far some three million people, a tenth of the population, have fled, and more are leaving every day.

Four out of five Venezuelans, including even many “Chavistas” and working-class supporters of Chávez’s “Bolivarian Revolution,” want him gone. Maduro maintains control through increasing repression and electoral manipulation. His last lines of defense are his core allies (who in recent years have looted the economy to the tune of $350 billion), his puppets in the National Assembly, and a thousand-plus Cuban operatives, long embedded in his government.

Maduro should go. Actually, straight to jail. But the Trump administration-led campaign seems designed to fail.

But getting rid of Maduro won’t be easy. Washington lacks credibility as a disinterested actor dedicated to the good of the Venezuelan people. Alas, Americans well-earned their reputation for “Yankee imperialism” through more than a century of military intervention in Latin America. Skeptics of Washington’s purported humanitarian intentions point to Venezuela’s 301 billion barrel oil reserves as a rich prize for American companies. Even many critics of Maduro do not back the U.S. campaign to oust the incumbent regime: a poll last month found 78 percent of Venezuelans opposed international intervention.

Threats of war have intensified regional skepticism. James Stavridis, the former North Atlantic Treaty Organization Supreme Allied Commander, said, “everywhere I went as a four-star Admiral in [Latin America] while commanding U.S Southern Command, I would be reminded of America’s history of intervention.” Even Brazil and Colombia were “deeply suspicious” of the creation of the Fourth Fleet in 2008, which was seen not as a tool for use in such tasks as drug interdiction and humanitarian relief, but as “a return to gunboat diplomacy and a prelude to military action in Venezuela.”

By taking the lead, the Trump administration has become an issue. Rallying people against outside pressure is a time-honored international tactic, especially by populist Latin American regimes. Some Venezuelans will choose local thugs over foreign meddlers. Moreover, Washington’s high-profile effort has encouraged Russia and China to rally to Maduro’s side. Their support will be limited but could help the regime survive.

Indeed, the administration will undermine attempts to employ the rule of international law in other cases. The U.S. claim that it is justified in breaking international rules, argued Representative Ro Khanna (D-Cal.), “is the same argument that led to U.S. blunders in Iraq, Honduras, Syria, Libya and elsewhere. Again and again, there is no respect for the United Nations Charter that makes it illegal under international law to seek regime change.”

Unfortunately, tougher economic controls are unlikely to force the regime to yield. Reducing the Maduro regime’s money will hurt it, but probably not enough to cripple it. Sanctions also will reduce funds available for the Venezuelan public, since the government controls most trade. However, Maduro and his allies will take care of themselves first. Complained Jose Bodas, an anti-Maduro union leader: “The rich will not stop getting richer, it’s the workers who will shoulder the cost of these measures.”

Starving the already suffering, whose vigorous opposition so far has failed to budge the regime, in hopes of fomenting a more effective uprising is a dubious strategy on both practical and moral grounds. Luis Vicente Leon, who heads the political consulting firm Datanalisis, said: “If this strategy isn’t successful quickly, the effect on the people will be devastating.” Unsurprisingly, eight of ten Venezuelans oppose U.S. sanctions.

Washington hopes that Maduro’s backers will end his reign, but their survival is tied to his. Most importantly, the military leadership, which Chávez transformed after the short-lived coup against him in 2002, has prospered along with the regime. Even if the Chavista elite decided to send Maduro packing, there is no reason to believe it would hand the keys to the kingdom to Guaidó or organize free elections.

Regime fractures might lead to civil war, with multiple contending factions. The outcome is impossible to predict. Although Guaidó unexpectedly unified the highly fractious opposition, he leans toward the socialist end of the economic spectrum. Some groups on the right complain that his Popular Will party is a member of the Socialist International. A bloody collapse might satisfy the Trump administration but could intensify the suffering of the Venezuelan population.

If the administration fails to oust Maduro through diplomacy and sanctions, it will suffer a major public relations embarrassment. Warned Senator Chris Murphy (D-Conn.) and former Obama administration official Ben Rhodes: “Chest-thumping declarations that melt away over time weaken American power and credibility.” But Washington has no apparent alternative if the Maduro regime doesn’t fold. Worried Michael Shifter of the Inter-American Dialogue: “My concern is whether they’ve boxed themselves in.” An impasse would encourage the president to act militarily.

Yet nothing justifies war. Vice President Mike Pence recently declared that “For the sake of our vital interests, and for the sake of the Venezuelan people, America will not stand by as Venezuela crumbles.” However, what vital American interest can he identify? There is none.

Admiral Craig Faller, head of the United State Southern Command, announced that “We are prepared to protect U.S. lives and protect the diplomatic facility in Venezuela.” However, Washington is keeping American diplomats on station as an explicit provocation. The Maduro government ordered U.S. personnel home, but the administration refused to comply. Washington may hope for an incident to justify military action. There also has been talk of using American military forces to move humanitarian aid into Venezuela, daring the Maduro government to block the effort. This would constitute the foreign policy equivalent of entrapment, enticing Caracas to take a step providing a casus belli.

Moreover, Fernando Cutz, who formerly served on the staff of the National Security Council, argued: “I don’t think you can underestimate the threat of a failed state very close to our borders.” Venezuela’s crisis certainly is bad for the country’s South American neighbors. However, the United States would hardly notice. Would millions of refugees swim the Caribbean and overrun Florida? Would al-Qaeda set up shop in anarchic Caracas? War-happy American officials routinely claim “vital interests” where none exist.