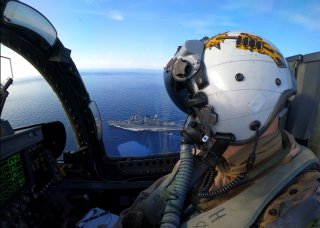 The United States has rejected all of China’s major claims in the South China Sea on Monday as tensions in the strategic region heat up.

China has long had territorial disputes with Vietnam, the Philippines, Taiwan, Malaysia, and Brunei over islands, reefs, and shoals in the region. The United States jumped into the fray on Monday, less than a week after China complained about a U.S. naval exercise in the disputed waters.

“The world will not allow Beijing to treat the South China Sea as its maritime empire,” U.S. Secretary of State Mike Pompeo wrote in a statement. “America stands with our Southeast Asian allies and partners in protecting their sovereign rights to offshore resources, consistent with their rights and obligations under international law.”

He cited a July 12, 2016 decision by an international court under the Law of the Sea Convention. The court had ruled in favor of the Philippines and rejected Chinese claims to the waters around the Spratly Islands.

China has denounced the court’s decision as a “sham.” Philippine foreign minister Teodoro Loscin Jr. called the decision “non-negotiable” at a Sunday ceremony marking the fourth anniversary of the case.

The United States has previously steered clear of maritime border disputes involving China and third countries, but the Trump administration is now pursuing a “competitive” strategy against the Chinese government in several different areas.

Pompeo’s announcement threatens to bring the United States into direct conflict with China, as U.S. forces are bound by a 1951 mutual defense treaty to help the Philippines defend “the island territories under its jurisdiction in the Pacific Ocean” as well as “its armed forces, public vessels or aircraft in the Pacific.”

The U.S. Secretary of State also claimed that the 2016 decision voids China’s claims to waters off the coast of Vietnam, Malaysia, Brunei, and Indonesia.

“The [People’s Republic of China] has no legal grounds to unilaterally impose its will on the region,” he stated. “Beijing uses intimidation to undermine the sovereign rights of Southeast Asian coastal states in the South China Sea, bully them out of offshore resources, assert unilateral dominion, and replace international law with ‘might makes right.’”

The South China Sea contains an estimated 11 billion barrels of oil, as well as major fish stocks. But its greatest importance is for shipping, as ships carrying around $5 trillion in goods pass through this sea each year.

China has not publicly responded to Pompeo’s claims, but has made its position on the South China Sea clear over the past few days.

“Despite being a non-claimant of the South China Sea, the U.S. desires to stir up troubles,” wrote Yan Yan, policy research director at the National Institute for South China Sea Studies, in a Sunday op-ed for the ruling Communist Party's Global Times. “It takes advantage of regional countries' claims to sow discord between these countries and China. It portrays a bully image of China.”