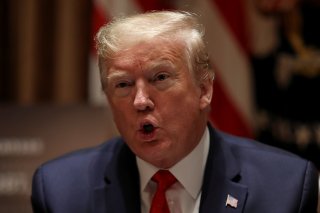 The White House is promising a “competitive approach” towards China in a new document warning that Beijing is no longer on the path to U.S.-friendly reforms.

U.S.-China tensions have been increasing rapidly alongside the coronavirus pandemic, but U.S. Secretary of State Mike Pompeo emphasized yesterday that tensions between the two countries are much deeper than the current crisis.

A report to Congress released by the White House on Wednesday night lays out the Trump administration’s approach to China, calling for “fundamental reevaluation of how the United States understands and responds” to Chinese leadership.

The report claims that previous hopes for a “fundamental economic and political opening” in mainland China have failed, and that Beijing now “promotes globally a value proposition that challenges the bedrock American belief in the unalienable right of every person to life, liberty, and the pursuit of happiness.”

“Beijing has repeatedly demonstrated that it does not offer compromises in response to American displays of goodwill, and that its actions are not constrained by its prior commitments to respect our interests,” the report states. “We acknowledge and respond in kind to Beijing’s transactional approach with timely incentives and costs, or credible threats thereof.”

The Trump administration laid out a set of measures to roll back Chinese influence, including mobilizing domestic law enforcement and even academic institutions.

The Department of Justice is stepping up efforts to prosecute industrial espionage and scrutinize foreign influence, while the Department of State will now require Chinese diplomats to report on contacts with government officials and academic institutions beforehand, the report stated.

U.S. immigration authorities have also tightened the rules for Chinese journalists applying for U.S. visas in retaliation for China’s expulsion of American reporters.

Federal research agencies are also working to “prevent conflicts of interest” involving researchers, the White House wrote, although the United States “values the contributions of Chinese students and researchers” overall.

The Trump administration stated that it “has also begun actions to block imports of Chinese goods produced using forced labor in Xinjiang.“ a region where Chinese authorities have detained Uyghurs and other Turkic Muslim minorities in camps en masse.

Notably, the White House promised to continue the status quo of unofficial support for Taiwan, a self-governing island that China considers a renegade province.

Republicans have generally supported stepped-up pressure on China, with Sen. Josh Hawley (R–Mo.) warning that “imperialist China seeks to remake the world in its own image” in a widely-anticipated Senate floor speech on Wednesday.

Democratic lawmakers are calling for caution with Beijing, but have serious complaints of their own when it comes to China’s actions and the Chinese political model.

China has stepped up its own heated rhetoric in tandem.

The editorial board of the Global Times, the English-language newspaper of China’s ruling Communist Party, wrote on Friday that “China must display its strategic demeanor as a major power” and “make China-US rivalry a process of US self-isolation.”

“If the US really walks beyond the lines, we will first make some US companies suffer to show our strength and resolve,” the editorial concluded. “Then we will think how to cope with all these changes and adopt a down-to-earth manner to engage in a prolonged struggle with a reckless US.”