What Do Progressives Think About China? 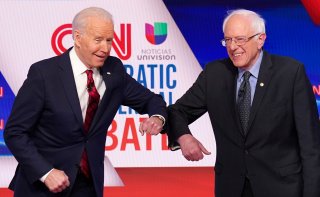 Progressives are diverging on how to respond as U.S.-China relations take a nosedive and former Vice President Joe Biden’s presidential campaign ramps up the rhetoric against Beijing.

The nearly-successful Democratic presidential bid of Sen. Bernie Sanders (I–Vt.) jump-started a progressive foreign policy infrastructure aimed at aligning U.S. power with left-wing values, and landed progressives a seat at the table with the Biden campaign.

Sanders has played a careful balancing act, pushing back against China’s threats to progressive values and calling for restraint. This balance may become increasingly difficult to maintain as American public opinion on Beijing sours and China embarks on a humanitarian influence campaign amid the coronavirus pandemic.

Some progressives have used a tough-on-China narrative to advance their foreign policy goals.

“Obviously, China has not been transparent about the coronavirus. Those are just the facts,” former Sanders campaign co-chair Rep. Ro Khanna (D–Calif.) said at an April 16 virtual town hall. “If we want more transparency from countries participating, we ought to be funding the World Health Organization, and insisting on reform and reporting requirements so that countries are held to account.”

Khanna had laid out a strategy in May 2019 to “ensure China does not win the 21st century and export its model of government globally” by redirecting money from “costly wars” into “investments in cutting edge science and technology.”

But other progressives have warned about the danger of diving into great power competition.

Just Foreign Policy executive director Erik Sperling draws a distinction “between those [progressives] who have adopted a left wing framing of the establishment view that China’s rise poses an existential threat to democracy worldwide, and those who believe that averting a new Cold War—with its likely arms races, proxy wars, and surging racism and Sinophobia—is the most urgent imperative,” he told the National Interest.

A recent Biden campaign ad slamming President Donald Trump for being soft on “the Chinese” over the coronavirus raised alarm bells with both Asian-American advocates and anti-war activists within the Democratic Party.

“Republicans, who promoted economic integration with China in the past, are now committing themselves to a cold war with China,” journalist Peter Beinart warned in The Atlantic. “If Democrats think that’s a political environment in which they’ll thrive, they’re making a big mistake.”

Some of this rhetorical difference may stem from a genuine difference of opinion.

“[P]rogressives generally are united in their skepticism of a new cold war or ‘full-spectrum competition’ with Beijing” but “disagree to some extent over the extent and nature of the challenge China poses,” explained Rachel Esplin Odell, a research fellow at the Quincy Institute.

Sanders foreign policy advisor Matt Duss told the National Interest in February that China is trying to export “an authoritarian capitalist system,” although he also warned against a “new Cold War.”

Sanders himself has a long record of opposing increased trade with China on human rights and labor rights grounds, arguing against giving Most Favored Nation trade status to Beijing as early as 1992.

Odell said that “old-school labor unionists tend to favor nationalist trade policies toward China” but younger progressives may be “more skeptical of crass unilateral protectionist measures against China or other countries, recognizing that tariffs will not reverse decades of outsourcing and will likely be welfare-reducing.”

Khanna told the National Interest in February that the United States needs to maintain its intellectual property rights and freedom of navigation—the latter backed up by a U.S. “military presence in the Indian Ocean and around South China.”

Beinart, on the other hand, has argued that the United States “better serves” countries in China’s neighborhood like Taiwan “by helping them reach the best possible accommodation with their great-power neighbors than by encouraging their defiance with promises America can’t keep.”

But overall, progressive priorities remain the same across the board: international cooperation, reduced military spending, and a more proactive role for the government in the economy.

“Do we think that there’s a bigger threat that Russian tanks are going to come into California, or a pandemic is going to come to California?” Khanna asked at his April 16 town hall, arguing against increased military spending.

“In place of military spending, progressives must promote bold domestic investments in the technologies of the future so we can remain competitive economically,” Sperling told the National Interest. “Progressives should insist that the most effective way to push back against China’s model is to provide a principled example for the world.”