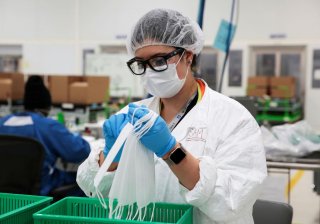 Democrats are lining up behind calls to investigate the Chinese government over a potential coronavirus coverup, but the progressive wing of the party is warning against turning calls for transparency into a pandemic-driven cold war with China.

Secretary of State Mike Pompeo doubled down Wednesday on controversial claims the novel coronavirus disease could have originated in a lab accident covered up by the Chinese government. The accusations come as American public opinion on Beijing sours, U.S.-China tensions ramp up, and lawmakers on both sides of the aisle call for a harder line.

Leading progressive lawmakers Sen. Bernie Sanders (I-Vt.) and Rep. Ro Khanna (D-Calif.) both agreed that China’s role needs to be investigated, but called for restraint and cooperation with U.S. allies in the face of a global crisis.

“There are very serious questions that we need to answer regarding how this virus emerged, and about Chinese government’s failure to contain its spread,” said Sanders foreign policy advisor Matt Duss. “We need to work with our international partners and allies to press the Chinese government to cooperate with an investigation and to stop spreading misinformation about the virus’s origin.”

“At this moment, the United States should be doing everything possible to build a coordinated, collaborative response with countries around the world to defeat this unprecedented economic and public-health crisis,” he told the National Interest by email, expressing skepticism that the virus was “man-made.”

Khanna, who served as Sanders’s presidential campaign co-chair, said that there are “conflicting” reports about the origins of the virus, but “China hasn’t been transparent about this pandemic” either way.

“We need to hold China accountable and shape multilateral institutions to prevent that kind of behavior in the future,” he told the National Interest in a statement. “The United States must work with the entire world to end this crisis, and that will require working constructively with China, as well as reasserting U.S. diplomatic leadership on the world stage.”

Khanna said he supports the “exact opposite approach” as the Trump administration, which has accused the World Health Organization (WHO) of abetting a Chinese coverup and cut its funding.

Republican firebrand Sen. Tom Cotton (R-Ark.) has gone even further than the Trump administration, arguing at the beginning of the crisis that the United States should “exact a very steep price” from China and referring to the present situation as “Cold War Two.”

Democrats have not shied away from competing with Republicans over who can take a harder line on China.

But the progressive camp has been more reluctant to join the war of words, seeing it as a distraction from major domestic issues.

“Unfortunately, Trump and Pompeo have repeatedly lied about issue after issue, and are clearly trying to incite hostility against China to distract attention from their own disastrous incompetence in responding to this pandemic,” Duss said, warning against a potential uptick in anti-Chinese racism as a result.

“Even if it was the case that somehow there was an accident where the virus got leaked, which is highly unlikely, the reality is that blaming another country for that happening is not really useful for Americans or people in other countries,” she said.

“While you have folks calling for China to pay, I’m not sure what that actually means, because if this scenario were true—which I don’t think it is—the way to prevent things like that in the future is to have more safeguards in place and increase U.S.-China and other countries’ scientific cooperation,” Kizer concluded.