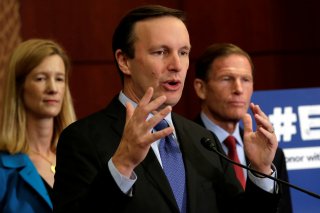 Murphy is quickly stepping into his role as the “McCain of the left” —the face of foreign policy consensus in the Democratic Party.

Over the past five years, he spearheaded the opposition against U.S. involvement in Yemen, helping push Congress to pass its first war powers resolution in history. And he’s met with political players around the world, from Ukrainian protesters to the foreign minister of Iran.

The United States is stumbling into an era of great power competition with one hand tied behind its back, Murphy now warns, and the next administration and the current Congress both have to play a role in fixing the damage.

The National Interest spoke to the senator about issues around the world, from the coronavirus pandemic to the political crisis in Venezuela. Below is a transcript of the conversation, lightly edited for clarity.

Great to meet you, Senator Murphy. Thank you for your time. I know it’s pretty busy for everyone, especially with coronavirus. That’s why I wanted to talk to you.

You’ve long been an advocate of Congress taking a bigger role in foreign policy, which is gaining more and more traction, especially on the progressive side of things. Could you tell me how Congress could play a more productive role in this global crisis that’s calling into question U.S. leadership?

The virus is a clear indicator that a threat can emerge to the United States on the other side of the world, and result in the death of tens of thousands of Americans within months. When it comes to non-conventional threats like pandemic disease, borders don’t matter. Today, with the Trump administration, you’re witnessing the consequences of our withdrawal from the world.

We took two thirds of our scientists out of China in the years approaching the breakout of coronavirus. We shattered our alliance with our European partners just at the moment that we needed to be working with them to hold China to account, make sure that we have enough medical equipment in the United States to fight the disease.

We are walking away from the WHO [World Health Organization] at the moment when only WHO can effectively stand up a future global public health infrastructure that can stop the next pandemic.

We warned the administration that there would be consequences for its wholesale retreat from the world, and we are now living with those consequences.

You ask what Congress can do. Congress has largely abdicated its responsibility to be a coequal branch with respect to foreign policy. Now is the time for Congress to step up.

We could pass legislation increasing foreign aid to make sure that we’re beating the virus everywhere, because we know that so long as it exists in a refugee camp somewhere in the Middle East, it’s still a threat to the United States

Congress has lots of mechanisms by which we could stand up the kinds of public health programming that are needed to muster the short-term and long-term responses we need to pandemic disease.

You’ve said that “the reason we’re in this crisis is not because of anything China did,” because we should have been prepared for it ourselves, but a lot of Republicans have introduced this idea that China should somehow be held to account or “pay” for the pandemic.

Where do you stand on this issue, and are there areas where you do think we need to push back harder against the Chinese government?

Well, first, I advise you to watch the whole clip, not just the three words that were picked out of it, because what I’ve said has been consistent: China bears responsibility for its efforts to cover up the initial extent of the virus and its continued efforts to obfuscate the scientific information we need to develop vaccines and treatments.

But there was no greater cheerleader for China’s coverup in January and February than President Donald Trump. On twelve different occasions, he praised China’s response. He lauded their transparency.

He was asked a point-blank question on February 7th as to whether China was covering up anything about the virus. He said, “no, they’re running a model response.”

Nobody frustrated the world’s efforts to try to get China to change its early behaviors more than Donald Trump did.

My point is that, while China bears much responsibility for this crisis, it was not inevitable that a hundred, two hundred thousand Americans had to die. The president has run an abysmal response to the virus, which has resulted in it being much worse in the United States than it had to be.

And so there’s lots of responsibility to go around. The Chinese bear much of it, but there is no way that the mistakes made in China needed to result in seventy thousand, a hundred thousand, or two hundred thousand Americans dying.

The question is, what do you do about it? Is the right response to withdraw from the WHO? Because if your complaint is that China has too much influence at the WHO, you essentially are exacerbating the problem that you’re seeking to solve by pulling the United States out.

I just haven’t seen any action from this administration that actually addresses the complaints they make about China.

Another country that’s been struck with the coronavirus, and has maybe been criticized for its own lack of transparency, is Iran. You and several other members of Congress have called for engagement with Iran over this coronavirus crisis, which the Trump administration has really been dragging its feet on.

How do you think the United States should be engaging Iran, both on coronavirus and in general, and what role should Congress be playing in this?

The case that we tried to make is that the Iranian people are not our adversary. The Iranian regime is our adversary. That’s a hard case to make when our sanctions are, in part, responsible for the death of innocent civilians due to coronavirus.

There’s no doubt that our current sanctions make it harder for Iran to stand up a response to this epidemic.

And our sanctions make it easier for the Iranian regime to make the case to their people that it’s the United States that’s standing in the way of medicines and medical technologies being delivered to the Iranian people.

The regime’s always engaged in propaganda that’s divorced from the truth, but it is true that our sanctions are hindering the Iranian medical response. What I think we should be doing is making sure that none of our sanctions are resulting in innocent people in Iran dying of coronavirus. I also think this is an opportunity for engagement.

I’m wondering specifically what you think Congress’ role in this can be, because a lot of these sanctions are up to executive discretion, but Congress also holds a lot of power over this.

There’s a majority in Congress that voted for the war powers resolution. I’m wondering what opportunities you see there.

I think, A, it’s difficult for Congress to micromanage sanctions policy. What I’m talking about is nuanced: decisions about what is subject to and what is exempt from sanctions.

B, there’s just not the political will in the Senate with Mitch McConnell as majority leader to pass a bill that eases medical-related sanctions on Iran today.

I just think, realistically, this is an endeavor the administration has to undertake.

I know that you met with Iranian foreign minister Javad Zarif in Munich. He had said, after meeting with a different senator, that he engages with American lawmakers “just for clarifications, not for negotiations.”

I’m curious how he approached his conversation with you.

That is my responsibility as a member of the [Senate] Foreign Relations Committee, to meet with foreign ministers, frankly regardless of whether they’re coming from a friendly country or an adversary.