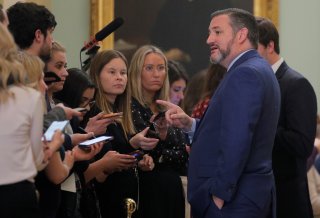 Sen. Dianne Feinstein (D-Calif.) has found herself on the opposite side as Democratic foreign policy leaders Rep. Eliot Engel (D-N.Y.) and Sen. Bob Menendez (D-N.J.) as the moderate wing of the Democratic Party splits over the Trump administration’s policies towards Iran.

A growing number of moderate Democrats have joined their progressive colleagues in calling for broad economic relief to Iran as the coronavirus pandemic ravages the country. But some moderate Democrats are siding with the Trump administration, doubling down on an economic pressure campaign they say is necessary to counter the Iranian government’s misdeeds.

Menendez and Engel, the top Democrats on the Senate and House foreign affairs committees, said in a joint April 3 statement that the Trump administration should “clarify that U.S. law does not penalize medical or humanitarian transactions meant to fight the [novel coronavirus disease] pandemic and publicly promote ways that financial institutions and governments around the world can help fight the pandemic in Iran.”

The two Democratic leaders came out against lifting economic sanctions that were imposed to punish Iran’s “malign” actions.

Feinstein, another moderate Democrat, staked out the opposite position. She asked President Donald Trump not to block Iran’s request for a $5 billion emergency loan from the International Monetary Fund (IMF) in an April 8 letter.

“I am increasingly concerned that Iran is now contributing to the potential for even greater spread of the disease within the region,” Feinstein wrote. “It is in our national interest, and in the interest of the international community, to help Iran contain this disease.”

The Trump administration had already come out against the loan in a statement to the National Interest. Trump ally Sen. Ted Cruz (R-Texas) attacked Feinstein for her letter in a social media post.

Menendez, Feinstein, and Engel all belong to the moderate wing of the Democratic Party but they have a history of diverging on Iranian issues. Feinstein supported then-President Barack Obama’s 2015 agreement to lift sanctions in exchange for curbs on the Iranian nuclear program.

Menendez and Engel opposed the 2015 deal from the beginning, although they also opposed Trump’s decision to replace it with a “maximum pressure” campaign.

Several moderate Democrats had signed a letter on March 26 calling for a ninety-day waiver on “sectoral sanctions that impede a rapid humanitarian response.” Several other moderates joined a March 31 letter spearheaded by the party’s progressive wing calling for even more substantial sanctions relief on Iran’s banking and oil sectors.

Feinstein and Rep. Ilhan Omar (D–Minn.) have been the only two lawmakers to explicitly back Iran’s request to the IMF, however, in a surprising alliance between a longtime moderate and freshman progressive firebrand.

“The undeniable cruelty of enforcing harsh sanctions on Iran during the pandemic has increasingly led the Trump administration to be isolated abroad and opposed by pro-diplomacy Democrats at home,” said Erik Sperling, executive director of Just Foreign Policy, which had spearheaded the March 31 letter.

Sperling told the National Interest that it is easier for Democratic leaders like Menendez and Engel to remain “silent or largely supportive of Trump sanctions policy” while “both members of Congress and their constituents are naturally preoccupied with domestic responses to” the coronavirus pandemic.

Trita Parsi, executive vice president of the Quincy Institute, added that many Democrats calculate that they need to look tough on Iran to “compensate” for supporting previous diplomatic efforts, which is “not inconsistent with how the Obama administration itself did things before it got serious about diplomacy.”

Former Vice President Joe Biden, now the Democratic nominee for the 2020 elections, took a middle path in an April 2 statement.

The concrete suggestions in Biden’s statement were largely similar to the ones made by Menendez and Engel: clarifying that humanitarian trade will not be punished under U.S. law.

But Biden did not praise the maximum pressure campaign as a response to Iran’s malign behavior. Instead, he wrote it was a mistake to withdraw from the 2015 accord.

“It is bad enough that the Trump administration abandoned the Iran nuclear deal in favor of a ‘maximum pressure’ strategy that has badly backfired, encouraging Iran to become even more aggressive and restart its nuclear program,” Biden wrote. “It makes no sense, in a global health crisis, to compound that failure with cruelty by inhibiting access to needed humanitarian assistance.”