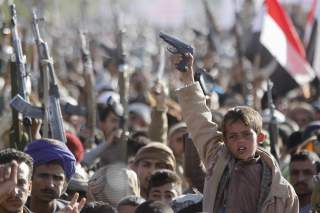 The Trump administration has made Saudi Arabia and the United Arab Emirates the foundation of its anti-Iran strategy. As a result, Washington, despite its avowed commitment to democracy, is supporting two authoritarian absolute monarchies. Riyadh recently distinguished itself by murdering and dismembering a journalistic critic in its own consulate.

Worse, however, the Saudis and Emiratis are proving to be the most disruptive, destabilizing forces in the Persian Gulf. Most disastrously, in 2015 they intervened in Yemen, turning that nation’s enduring internal strife into another front in the region’s dangerous sectarian struggle.

Their brutality has been ostentatious, bombing urban and civilian targets, including hospitals, markets, funerals, apartments, and more, and killing tens of thousands of non-combatants. The UAE also maintained detention facilities utilizing torture, at which American personnel have been present, though supposedly not involved in illegal behavior. Amnesty International reported “detailed stories of detention at gunpoint, torture with electric shocks, waterboarding, hanging from the ceiling, sexual humiliation, prolonged solitary confinement, squalid conditions, inadequate food and water.”

Moreover, the “coalition” led by the UAE and Saudi Arabia, has been aiding America’s adversaries. Al Qaeda in the Arabian Peninsula (AQAP) is the most effective affiliate of the organization which downed the twin towers. The rebel Houthis dislike America but hate AQAP even more. However, the Saudi/Emirati assault has diverted the Houthis’ attention from dealing with America’s enemies. Chaos and conflict are ever the terrorists’ friends.

Worse, the Emiratis/Saudis, and the nominally legitimate government of President Abdrabbuh Mansur Hadi which they are supporting, have been aiding, arming, and recruiting radical jihadist groups, including AQAP. (Riyadh and Abu Dhabi also employ members of the Sudanese Janjaweed militia, known for its brutality.) Last year the Associated Press reported that the coalition paid and recruited AQAP members and “cut secret deals with al-Qaida fighters, paying some to leave key cities and towns and letting others retreat with weapons, equipment and wads of looted cash.” Moreover, “Coalition-backed militias actively recruit al-Qaeda militants, or those who were recently members, because they’re considered exceptional fighters.”

Emirati money also went to the AQAP-related Abu Abbas brigade, whose founder, Abu al-Abbas, was labeled a terrorist by Washington. “The coalition is still supporting me,” declared al-Abbas, even though his group launched a raid which freed Al Qaeda fighters from a local security facility. Salafist Adnan Rouzek runs a brutal force which operates under and is subsidized by President Hadi. Rouzek’s top aide is Al Qaeda and has been regularly seen with Al Qaeda officials; his group, explained AP, is “one of the main recruiters of al-Qaeda fighters” in the city of Taiz. “In one case, a tribal mediator who brokered a deal between the Emiratis and al-Qaeda even gave the extremists a farewell dinner.”

This close relationship should surprise no one. Riyadh has spent tens of billions of dollars supporting fundamentalist Wahhabism around the world, including in Yemen. In contrast, the Houthis, a Shia off-shoot, are relative religious moderates, even though not friendly toward the West.

The issue is not just common firearms. AI discovered the same models of U.S. and European tanks and other armored vehicles being used by UAE-backed militias. These transfers violated U.S. and European law. Observed AI’s Patrick Wilcken: “Emirati forces receive billions of dollars’ worth of arms from Western states and others, only to siphon them off to militias in Yemen that answer to no one and are known to be committing war crimes.”

CNN conducted its own investigation and expanded the allegations to transfers by Saudi Arabia, to AQAP-linked fighters, and of such weapons as TOW antitank missiles and mine-resistant ambush protected (MRAP) vehicles. Reported the news service: “Saudi Arabia and its coalition partners have transferred American-made weapons to al-Qaeda-linked figures, hardline Salafi militias, and other factions waging war in Yemen, in violation of their agreements with the United States.” CNN reported that the Abu Abbas brigade possessed U.S.-manufactured Oshkosh armored vehicles. Overall, the Saudis and Emiratis “have used the U.S.-manufactured weapons as a form of currency to buy the loyalties of militias or tribes, bolster chosen armed actors, and influence the complex political landscape.”

This practice is bad for Yemenis, particularly civilians who are being killed. Argued Wilcken: “arms-supplying states need to reflect hard on how their arms transfers are continuing to directly and indirectly fuel war crimes and other serious violations. The proliferation of unaccountable, UAE-backed militias is worsening the humanitarian crisis and posing a growing threat to the civilian population.”

Illicit weapons transfer also are bad for America. Noted AP: “compromises and alliances have allowed al-Qaeda militants to survive to fight another day—and risk strengthening the most dangerous branch of the terror network that carried out the 9/11 attacks. Key participants in the pacts said the U.S. was aware of the arrangements.” However, the Trump administration believes that aiding the monarchies against Iran is more important than combatting AQAP. Observed Michael Horton of the Jamestown Foundation: “It is now almost impossible to untangle who is AQAP and who is not.” He said “much of the war on al-Qaeda by the UAE and its allied militias is a ‘farce.’”

Moreover, reported CNN, some weapons ended up in Houthi hands: “in September 2017, a Houthi-run television channel broadcast images of Mohammed Ali al-Houthi, the de facto rebel leader, proudly sitting behind the wheel of a U.S.-made MRAP in the capital of Sanaa, as a crowd chanted ‘death to America’ in the background.”

Arms even flowed to Tehran, where U.S. weapons were studied and copied by Iranian intelligence and perhaps used by the Islamic Revolutionary Guards. The Houthis confirmed that Tehran already possessed MRAPs, which were developed in part to defeat IEDs, improvised explosive devices. One official told CNN: “Iranian intelligence are assessing U.S. military technology very closely” and “there isn’t a single American weapon that they don’t try to find out its details.” This may be the most ironic outcome of a Western policy justified as helping to contain Iran.

These were not easy stories to develop. The Associated Press noted that “All but a few . . . sources spoke on condition of anonymity, fearing reprisals. Emirati-backed factions, like most armed groups in Yemen, have been accused of abducting or killing their critics.” And we know the Saudis dismember theirs.

These allegations are shocking but continue to be largely ignored by the administration. Gen. Joseph Votel, head of Central Command, told a Senate hearing that “We have not authorized Saudi Arabia or the Emirates to retransfer any of this equipment to other parties on the ground in Yemen.” The Pentagon was “looking more closely at the allegations,” he added, but to halt U.S. support for the coalition would eliminate the “leverage we have to continue to influence them.” Influence? America’s “allies” continue to slaughter civilians, employ torture, aid al-Qaeda and other radical groups, and transfer American weapons to America’s enemies.

President Donald Trump took a special interest in America’s “beautiful military equipment,” the sale of which he considers to be a great accomplishment. Surely he should be concerned about the transfer of those arms to those ready to kill Americans. Reported CNN: “Some terror groups have gained from the influx of U.S. arms, with the barrier of entry to advanced weaponry now lowered by the laws of supply and demand. Militia leaders have had ample opportunity to obtain military hardware in exchange for the manpower to fight the Houthi militias. Arms dealers have flourished, with traders offering to buy or sell anything, from a U.S.-manufactured rifle to a tank, to the highest bidder. And Iran’s proxies have captured American weapons they can exploit for vulnerabilities or reverse-engineer for native production.” As such knowledge is disseminated, American forces will be at greater risk around the world.

The United States has no cause to be involved in Yemen, making enemies of people who previously did Americans no harm. Washington’s policy is both hypocritical and dangerous. Noted Daniel Larison of the American Conservative: “While administration officials hyperventilate about alleged Iranian weapons shipments into Yemen, U.S.-made weapons have been reaching the allies of AQAP and ISIS.” America should quit this bloody, unnecessary war before U.S. citizens are killed by their own government’s weapons.