To Avoid an Iraq-Style Disaster Under Trump, Bolton Must Go 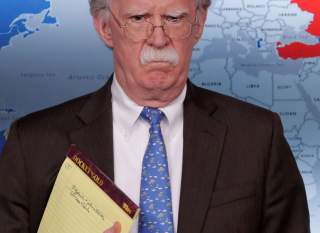 President Donald Trump’s instincts on a number of key foreign-policy issues over the past two years have not only been right, but also represent sorely needed policy course-corrections. Yet since his inauguration, some of the president’s closest advisors have consistently steered him away from his better ideas, leaving us to languish in losing wars—and unnecessarily risking getting us into new ones.

For Trump to escape the molasses pit of failed wars, he must replace some key advisors with capable people who are aligned with his views and can implement his vision. The first of those ineffectual advisors who needs to go is John Bolton.

Bolton has long served in government and the Washington think-tank establishment, but his foreign-policy prescriptions have been outright disastrous for the United States.

Most famously, Bolton was one of the leading advocates for invading Iraq in 2003. Yet even after the invasion was proven to be a disastrous move (remember, there were no Al Qaeda forces in Iraq, and ISIS didn’t exist, prior to the invasion Bolton promoted), he still defends this mistake to this day, calling it “fully justified.”

Evidence of his unrepentant views abound. He has called for the bombing of Iran and directly advocated “regime change” operations (as he has or does seek in North Korea, Libya, Syria, Cuba, and Venezuela). As Trump routinely reiterated during the 2016 campaign, the invasion of Iraq is a sixteen-year-and-counting disaster—resulting in 4,568 American troops killed and more than 32,000 wounded—repeating the mistake in Iran would be orders of magnitude worse, as Iran is bigger than Iraq, much more populous, and has far more capacity to strike back.

Attacking Iran, however, is wholly unnecessary to preserve American security, as our conventional and nuclear deterrents are more than sufficient to deter them indefinitely. Military strikes against Iran would unequivocally weaken our security and unleash outcomes that could spiral out of anyone’s control.

Because he never learned the failed lessons of the Iraq invasion, Bolton continues to openly, routinely, and emphatically maintain his advocacy for regime change as the primary tool of statecraft. This policy stands in direct contravention for what Trump campaigned on, what got him elected, and what he says he still believes. If he is to get re-elected, then he’s going to have to make changes between now and November 2020.

What Trump has needed from the beginning are advisors who understand his thinking on foreign policy, are aligned with his views, and have the ability to turn the president’s vision into operational reality. Neither the previous nor the current national security advisor have had this ability. There is, however, a Washington, DC-based expert who does.

Douglas Macgregor isn’t a household name, but it’s not because he lacks a hefty resume. He has a Ph.D., has written several books on national security, and is a highly decorated combat soldier. Full disclosure: I’ve known Macgregor since 1990 when I served under him in an Army cavalry squadron. Over those nearly thirty years, I’ve watched as he has been right on one major national-security issue after another.

He was the director of the Kosovo Air Campaign for NATO in the late 1990s. Macgregor advised the Secretary of Defense on operational planning prior to the 2003 Iraq war (but his advice on using the Iraqi army to provide civil security after the war was tragically ignored). He advised against military intervention in Libya in 2011 and has devised a comprehensive new plan to reorganize and modernize the U.S. military.

For all his accomplishments and credentials, however, there are two things that would make Macgregor uniquely appealing as Trump’s next national security advisor.

The first is that he is aligned with Trump’s stated instincts on key foreign-policy subjects. Instead of trying to bend the president to his way of thinking—as both McMaster and Bolton appear to have attempted—Macgregor would be able to turn Trump’s vision into policy reality.

Second, unlike the vast majority of senior officials in Washington, he is not a shameless self-promoter and genuinely desires to see the nation prosper above all. I saw this play out firsthand in 1991 during and after Desert Storm.

The 2nd Squadron, 2nd U.S. Cavalry won the largest tank battle since World War II, known as the Battle of 73 Easting. In this fight, the Squadron defeated a much larger, dug-in tank force. Most of the notoriety for this fight went to former National Security Advisor H. R. McMaster, who was the commander of the 120-man armored unit (Eagle Troop) that was at the center of that fight.

I was a lieutenant serving under McMaster during that battle and can confirm he fought with great distinction. But he wasn’t the sole reason for the squadron’s battle success, nor possibly, the biggest reason for it. That title more appropriately belongs to Macgregor.

It was Macgregor—then an Army major and the operations officer of the seven-hundred-man squadron—that formulated the attack plan for the entire battle group, had trained the men prior to deployment, and was responsible for deciding how to employ the four company-sized units (Eagle Troop being one of them) at the key moments of the battle.

During the fight, he led from the front—at one point being in front of Eagle Troop’s forward-most scouts, making it hard for us to shoot the enemy—and made sure the entire enemy formation was utterly annihilated before passing the fight to U.S. armored divisions trailing behind.

Yet almost no one knows about Macgregor’s indispensable role in the Battle of 73 Easting. Why? Because he contented himself with allowing the Squadron commander and McMaster to have the public praise. Knowing he did his duty and the squadron had major success was enough for him.

He could provide the same caliber of quality, selfless service to the president.

With simmering foreign-policy challenges in China, Russia, Iran, North Korea, and South America, it’s important for U.S. national security that Trump’s better instincts get transformed into effective policy. Bolton and status-quo Washington got Iraq wrong. Trump and Macgregor got it right. Trump’s best chance to reap a number of major foreign-policy successes in his second two years may hinge on hiring an advisor like Macgregor.