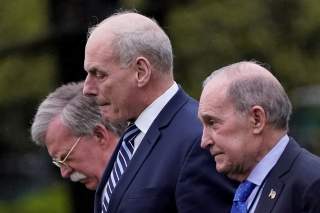 “Earlier in the year it was going to be a big change by the end of summer,” but now that’s probably shifted, a former defense official in the orbit of the White House and senior Congressional Republicans told me earlier this week. Among those who could leave or be forced out includes much of the meat of Donald Trump’s national security team: Chief of Staff John Kelly, Secretary of Defense James N. Mattis and new National Security Security Advisor John Bolton. But for now, a likely pause.

If anyone is currently on the president’s radar, it’s Deputy Attorney General Rod Rosenstein, as Gabriel Sherman reported earlier this week in Vanity Fair. Sherman also elaborated on the Kelly situation. The president publically assured Kelly this week that he could stay on through 2020.  But according to Sherman, the president also feels: “Whatever, we’ll deal with Kelly after the midterms.”

Speaker Paul Ryan, whom some right-wingers previously targeted for early departure, is likely safe until after then, as well. He is now seen by this same cohort to serve out his term as speaker. In the meantime, Kevin McCarthy, Steve Scalise and Jim Jordan quietly vye to succeed him. The likelihood of Jordan, a charter member of the conservative House Freedom Caucus (HFC), vaulting to power is still seen by most as a distant possibility: the animating goal is to increase HFC’s leverage with the future leadership team, perhaps getting one of their own in the top three ranks, as either majority leader or whip.

The midterm timeline for some sort of public Republican stasis makes sense.

The elite reaction to the Helsinki summit as well as the continuing drip from the Mueller investigation have dulled the appetite for new risk. The economy is robust, the president’s approval numbers are competitive—let’s take our chances, the thinking goes. And the midterms are truly the hinge point of Trump’s presidency, or Trump’s “first re-elect” as former White House Chief Strategist Steve Bannon has been calling it. If his party loses both the House and the Senate, his administration could be sundered. If his party loses only the House, impeachment hearings (though not necessarily a vote) are assured. Failure to hold Congress could mean a presidency truly spinning out of control. Accordingly, the type of personnel he would want around him hinges on which of the three scenarios occurs: the perpetuation of the status quo, a loss of one of the houses of Congress, or a complete defeat.

Kelly himself is diminished from where he was when he inherited both the operational mantle of former Chief of Staff Reince Priebus and the policy mantle of Bannon late last summer. A former senior administration official told me that Trump, ideally, wouldn’t even want a chief of staff, that he’d prefer to run the White House like he ran his business, with a rotating, extemporaneous cadre of official and unofficial advisors with no one arbiter getting in the way of facetime with the man on top.

“First off, chief of staff qua chief of staff—he’s not chief of staff. I mean, let’s be blunt,” Bannon told The Hill about Kelly Friday. Bannon’s stature with the president has been quietly, but steadily rehabilitated from the apocalypse in January—when Trump publicly denounced him. A veteran conservative activist privy to discussions in the White House and on the nascent 2020 campaign told me he expects Bannon could be fully rehabilitated in the administration’s eyes by the end of the year. Trump has taken more interest in Europe, where he continues to haggle with EU officials and where officials like Ambassador Richard “Ric” Grenell publicly support populist parties; Bannon’s clout and nascent infrastructure, the recently-announced organization The Movement to be headquartered in Brussels, will be useful. And the White House has expressed no opposition to Bannon’s work as unofficial surrogate for the president, a role he has been staking out for many months.

If Kelly, Mattis or Bolton were to go, a host of candidates could vy to replace them, with foreign policy implications galore. When the president has sacked top officials before, generally a clear alternative had emerged. The problem with replacing Kelly is there are actually two candidates: the vice president’s chief of staff, Nick Ayers, reportedly favored by Jared Kushner and Ivanka Trump, and Mick Mulvaney. Mulvaney, a former congressman, is popular among many on the libertarian and restrainer right. Kelly is widely seen as shielding Mattis from scrutiny, a senior U.S. military officer and defense consultant told me, even if Mattis has fallen out of the president’s day-to-day inner circle, as evidenced by his absence at both the Helsinki and Singapore summits.

Bolton has been given the Syria and Russia portfolio, while Pompeo has been given the North Korea portfolio, as scuttled candidate for the Korea ambassadorship Victor Cha told an audience in Washington earlier this year. If Kelly were to move though, Mattis could follow, perhaps by years’ end. There restrainers could be dismayed, as the leading candidate is Tom Cotton, who balked at taking over the CIA but would likely embrace the larger portfolio of the Pentagon. On policy, Bannon told me he loves Cotton but is “still trying to wring out the neo-con in him.” But if Bolton, a career ultra-hawk, eventually balks at having to execute President Trump’s increasingly non-interventionist agenda, one name, who has been considered before, is bubbling to the surface: retired U.S. Army Col. Doug MacGregor, a favorite and regular guest of restrainer television host Tucker Carlson, a program the president views constantly.

Curt Mills is foreign-affairs reporter at the National Interest .