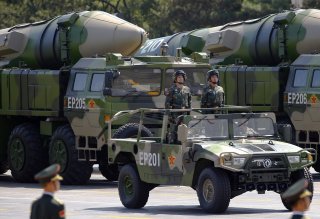 No, China is not planning on increasing its stockpile of nuclear warheads to parity with the United States anytime soon. But they have raised the profile of their online trolling game to compete with the U.S. under its current president.

Global Times editor-in-chief Hu Xijin published an editorial on May 9 calling for China to “increase its nuclear warheads to 1,000 in a relatively short time span” and to “fix its nuclear gap with the US.”

That came one day after the Times published a news article quoting analysts who recommended, in the words of the headline, that China “expand [its] nuclear arsenal to deter US warmongers.” The fact that the US has continued to conduct B-1B flyovers of the East China Sea and Pentagon plans to arm Marines in the Pacific with Tomahawk cruise missiles were cited as reasons for heightened vigilance.

America’s 2020 defense budget calls for deploying W76-2 tactile nuclear warheads on its submarines, a proposal in line with the U.S. 2018 Nuclear Posture Review that the Global Times has been sounding the alarm about for the past two years. The Trump administration continues to push for bringing China into a new arms control treaty with Russia.

In Hu’s own editorial, he wrote, “[I]f the US initiates a nuclear war at China, it must not have any chance of winning -- that's the kind of nuclear deterrent China must secure.”

But just because the Global Times is a state-controlled paper doesn’t mean its editorials reflect the voice of the state. The Global Times is the party’s sensationalistic tabloid, while the People’s Daily, whose parent company publishes the Times, is the more solemn party-line mouthpiece.

The “experts” cited in the Times’ May 8 article were also of questionable influence, and their comments did not support Hu’s proposal. One, Song Zhongping, is a TV commentator and graduate of a PLA school who contributes op-eds to the Times and is cited in hundreds of other Times military articles, usually taking an aggressively nationalistic position. He said “China will have to expand its nuclear arsenal.” The other, Wei Dongxu, said China should upgrade its nuclear force. (The article also quoted Hu’s own recommendation.) Neither of them called for increasing China’s stockpile to 1,000 or more.

It is commonly understood that China intends to expand its arsenal, but the projections are more on an order of a few hundred, not a few thousand. The U.S. Defense Intelligence Agency projects China could double its warheads in the next decade, which would represent an increase from estimates of more than 250 to approximately 500 of 600. The U.S. has 3,800 active warheads, with 1,600 deployed.

Hu called for at least 1,000 warheads in the three paragraphs of Chinese he originally posted to China’s Weibo microblog, but then he upped the ante to imply parity in his English language editorial. Either way, both numbers are well above what Chinese experts are proposing and what American experts observe of China.

China is also modernizing its arsenal, with longer-range missiles and enhancing the weak points in its nuclear triad, but their modernization is about quality, not just quantity.

But if Hu’s editorial doesn’t reflect the agenda of the Chinese government, that was probably never his goal. He succeeded in firing up Chinese nationalists and attracting domestic and international attention. His first post went viral on Weibo, with tens of thousands of retweets in China, and got picked up by Baidu News. In English-language media, he got write-ups in Reuters and the Falun Gong-affiliated Epoch Times.

His weapon of words hit its target, and not for the first time. Just in the past two days, Hu was also quoted by Australia’s Spectator as calling the country a piece of “chewing gum stuck on the sole of China’s shoes” that must be “rub[bed] off” after Australia called for an investigation into the origin of coronavirus and quoted by CNN as tweeting, “The incompetence of US (government) is like a mirror, reflecting the reliability of Chinese (government).”

The prominence of Hu’s Twitter account is reflective of a change in China’s media strategy. Diplomats and state-run media figures are increasingly relying on Western social media outlets to get their points to the world and go viral. Their way of communicating is also changing; not just bland Party-speak that goes right by the eyes of Americans, but provocative bromides and table-turning meant to trigger as much as to convince.

There was a joke on China’s social media early in the Trump administration: Chinese netizens used to pay attention to President Obama’s Twitter account in order to practice English; now when they read President Trump’s tweets, they think their English is already very good! But if Chinese are not learning English from @realDonaldTrump, they are learning social media tactics.

Hu’s Twitter followers have surged from 20,000 last April to over 254,000 today, and he has gotten into Twitter feuds with hedge fund managers.

Lijian Zhao, deputy director of the Chinese Ministry of Foreign Affairs Information Department, has risen to prominence as the Chinese government’s most successful Twitter star. Zhao is well known for having pushed the conspiracy theory that coronavirus was brought to Wuhan by American soldiers. But what is interesting about his strategy is how he relied on Western conspiracy blogs to base his case.

He linked to the Canadian blog GlobalResearch.ca in a few of his tweets. It’s as if he’s subtly pointing out how much of a cesspool the free and open internet is in the West. The virus might not have been manufactured in North America, but the conspiracy theory was.

In that case, too, the formal face of China, Ambassador Cui Tiankai, had a more moderate view: avoid conspiracy theories and blame games. Zhao is the Global Times to Cui’s People’s Daily.

Hu’s call for ramping up nuclear warhead production does not reflect official policy, but it does reflect a sentiment. The Chinese government is feeling besieged, as are many patriotic Chinese citizens. Many Chinese who are casual patriots, not nationalists, are joining in, accounting for the proliferation of messages like Hu’s and Zhao’s across Chinese social media.

If the United States wants to affect change in China, and the administration does, judging by the fact that they have Deputy National Security Advisor Matthew Pottinger giving speeches in Mandarin directed at the Chinese public, their strategy is likely to be counterproductive. At a time when China could be vulnerable, it is instilling nationalism and allowing the Chinese government to create a common enemy.