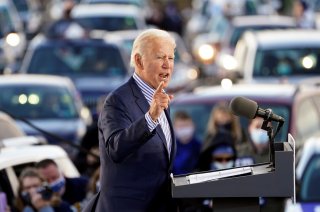 Trump-hatred, combined with group-think, is poisoning the ability and willingness of some journalists to examine soberly the issues that impact America’s foreign policy.

That point has become glaringly evident in how mainstream media outlets are treating the blockbuster New York Post articles based on files allegedly contained in a computer that Democratic presidential nominee Joe Biden’s son, Hunter, left with a Delaware repair shop. The first story included evidence that Joe Biden was far more involved in his son’s questionable dealings with the Ukraine energy company Burisma than he had contended—including being asked to meet with at least one Burisma executive. That apparent greater involvement also raised new questions about the former vice president’s role in demanding that the Ukraine government fire prosecutor Viktor Shokin.

The subsequent New York Post article presented email evidence that Hunter Biden had been given a 20 percent stake in a Chinese investment fund at a massive discount from its actual value. Worse, one of the documents asserted that although Hunter’s stake was 20 percent, an additional 10 percent was set aside under his supervision “for the big guy.” Tony Bobulinski, Hunter’s former business partner, later not only confirmed that the incriminating e-mail was genuine, he stated that “the big guy” referred to Joe Biden.

There were legitimate questions about the authenticity of the files, including murky aspects about the chain of custody. Whether all (or even any) of the allegations are true remains to be seen. Caution is warranted about the accuracy of the New York Post stories, but the accounts certainly are newsworthy and warrant further investigation. Instead, the dismissive reactions of most press members are unsettling, if not alarming. They uncritically embraced the hasty, shallow arguments of critics that it was all another Russian disinformation campaign. The “evidence” for that assertion was little more than the speculations and opinions of former intelligence operatives—most of whom had lengthy anti-Trump and anti-Russia track records. Even though the FBI and the Director of National Intelligence promptly shot down the Russian disinformation campaign thesis, most members of the mainstream press proceeded to treat it as gospel.

Media outlets have given exposure to minimally sourced allegations on similar issues, with the sketchy Russian bounties story being a prime example. Adam Macleod of Fairness and Accuracy in Reporting (FAIR) even concluded that “evidence‐​free claims from nameless spies became fact” in most media accounts. The contrast to the treatment of the Biden computer files allegations could not be starker. Some journalists have shown a strange lack of curiosity and adopted a hostile attitude toward the topic. Social media sites Facebook and Twitter took the extraordinary step of blocking access to the New York Post articles. In Twitter’s case, restrictions even included temporarily suspending the New York Post’s account and that of White House Press Secretary Kayleigh McEnany.

With good reason, National Review’s David Harsanyi charged in an op-ed that “’Russian ‘disinformation’ has become the single laziest, dumbest, and most cynical rationalization for journalistic malpractice and political activism over the last four years. Journalists, after all, are in possession of a highly sophisticated method of bypassing foreign ‘disinformation.’ It’s called ‘asking the candidate a question.’ Yet, as far as I can tell, they’ve queried Biden as often about his favorite flavor of ice cream as they have about Hunter’s emails.”

The Intercept’s Glenn Greenwald has taken his fellow reporters to task for their brazen, sterile double standard. “Why did Facebook block none of the endless orgy of Russiagate conspiracy theories from major media outlets that were completely unproven if not outright false?” He openly wondered whether the vaunted “fact-checking” process was being applied with any degree of consistency, “given how often they failed to suppress sketchily sourced or facially unreliable stories—such as, say, the Steele Dossier and endless articles” based on it. “Can you even envision the day when an unproven conspiracy theory—leaked by the CIA or FBI to the Washington Post or NBC News—is suppressed?” he asked.

Unfortunately, group-think appears to be running amok among the mainstream media. In the process, that attitude has short-circuited meaningful inquiry into not only the behavior of a major party presidential candidate but the conduct of the Ukrainian and PRC governments. If genuine, the Biden files indicate that those regimes or their puppet corporations devoted a considerable amount of energy and funds to currying favor with a leading American political player—one who might well become president of the United States. Such an influence campaign has significant relevance to Washington’s current and prospective relations with those countries. Ignoring the implications amounts to an abdication of the news media’s essential responsibility to monitor the behavior of the U.S. government and its leaders, past and present.

Ted Galen Carpenter, a senior fellow in defense and foreign policy studies at the Cato Institute and a contributing editor at the National Interest, is the author of twelve books and more than 850 articles on international affairs. His 1995 book, The Captive Press: Foreign Policy Crises and the First Amendment, was designated an “Outstanding Academic Book” by the College Division of the American Library Association.