The Deal Mike Pompeo Should Pitch to North Korea: Trading Paper for Plutonium 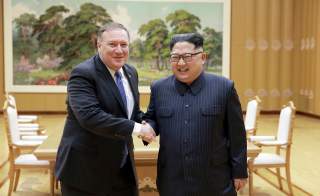 Just a few days ago, President Donald Trump did the unthinkable: he declared that he and North Korean dictator Kim Jong Un “fell in love”.

And yes, even though it was clear the president was kidding, Trump may have been trying to flatter Kim for a reason.

With Secretary of State Mike Pompeo heading to Pyongyang to meet with the North Korean Chairman—his fourth such visit to the “hermit kingdom” this year alone— this weekend, Trump is racing against time to achieve a diplomatic breakthrough that could transform not only Northeast Asia, but also help bolster his administration at home.

The foundation of that breakthrough, and what Pompeo is trying to achieve, is a commitment by Kim for a second U.S.-North Korea summit. Thanks to a convergence of factors, the Trump administration is altering its approach towards Pyongyang, as well as its demands about its nuclear weapons program, setting the stage for another historic meeting in the coming weeks.

For a start, Team Trump’s greatest challenge on the world stage is not North Korea—a nation with an economy one-third the size of Ethiopia—but China.

In a speech on Thursday at the Hudson Institute, Vice President Pence all but named Beijing the “evil empire.” He called out China for bad behavior that goes back decades. From predatory trade practices, to the theft of intellectual property, from allegations of tampering in the American political process to widespread spying and more, Pence laid out the case for why China is not only a threat—but also why it should be contained.

And while such a strategy has been growing in popularity in recent years, especially in American conservative national security circles, there can be no doubting that if it is implemented, there would be significant costs. For it is China that will ultimately decide if America’s “maximum pressure” strategy on North Korea—or punishing economic sanctions—lives or dies. As 90% or more of North Korea’s exports go through Beijing—in addition to China providing the only major pipeline providing most of the north’s crude oil—it is Beijing that is being tasked with helping to enforce Washington’s strategy. And with evidence mounting as far back as late spring that maximum pressure was in trouble, China will almost certainly use sanctions enforcement as a bargaining chip with America—or end the policy altogether.

There is also the administration’s recent change in approach to North Korea, which also served to undermine the maximum pressure strategy. When Trump held a historic summit with Chairman Kim in Singapore--a major concession that legitimized the North Korean dictator--it put a human face on the leader of a nation that has one of the worst human rights records on the planet. Nations and profit-hungry corporations around the world surely took the summit as a greenlight that Washington was signaling it was seeking to move to normalize ties—both diplomatic and economic—with the regime. Once the images of Trump and Kim shaking hands entered the global consciousness, North Korea’s image softened for the foreseeable future.

Knowing his leverage on the Kim regime is likely fading, Trump also might have a more Machiavellian reason for wanting a deal with the Pyongyang now: to change the media’s focus to a legacy defining win with the midterm elections coming up.

If all goes well, the administration could organize the summit a week or so before voters head to the polls. Knowing that media attention would be intense and mostly positive—ending the Korean War would surely help move the news cycle off the recent Supreme Court battle—Trump could focus the electorate on a major diplomatic breakthrough. And with a recent poll from the Chicago Council on Global Affairs showing most American view North Korea as a top national security threat, positive news such as this surely would burnish the Trump agenda.

Trump’s path forward on all of this seems pretty clear. In an interview with the Washington Post, South Korea’s foreign minister Kang Kyung-wha laid out a possible compromise—essentially trading paper for plutonium— where by Washington would agree to a peace declaration to end the Korean War. In exchange, North Korea would close the important nuclear facility at Yongbyon, in what would be a major first step towards eventual denuclearization. Pompeo should use this as the basis of his pitch to Chairman Kim, as this could be the key deliverable of any summit meeting between America and North Korea. If he plays his cards right, Trump can deliver an October surprise.