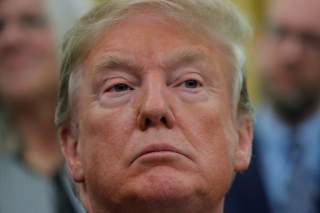 In his State of the Union address, President Trump proclaimed that “great nations do not fight endless wars.” This statement of intent shouldn’t have surprised anyone.

After all, the declaration came from a president who has long held disdain for the war in Afghanistan and viciously criticized the failed invasion of Iraq. But, this proclamation of peace calls into question Trump’s commitment to actually ending these endless wars. Trump certainly isn’t putting a stop to wars when he ratchets up American pressure against Iran and Venezuela and continues to delay the withdrawal of American presence in Syria—in fact, he may be encouraging further conflict.

Still, anti-war activists celebrated in December when Trump announced his plan to withdraw U.S. troops from Syria. Yet the cries of the war hawk faction of the Republican Party stalled any immediate withdrawal, as National Security Adviser John Bolton said withdrawal was unlikely until ISIS was entirely destroyed and dismantled, and America’s partners the Kurds were protected. Moreover, Senator Lindsey Graham, R-SC, claimed back in December that Trump promised to slow the withdrawal from Syria.

Although the administration claims to be making plans for an April withdrawal, they’re also going to continue to operate a remote base on the Jordan-Syrian border with the specific purpose of containing Iran. In his SOTU, Trump said we ought to “give our brave warriors from in Syria a warm welcome [home].” But how can we when hundreds will still be in Syria? Maintaining a military presence there—even if it’s merely to keep an eye on Iran— could easily boil over into another war and require our military’s large-scale return to the area.

Furthermore, this president’s foreign policy is rife with contradiction. While Trump spoke warmly of peace talks with Afghan militant groups like the Taliban in his SOTU, he also boasted of placing harsh sanctions on Iran. Unfortunately, Trump is an Iran hawk. He has surrounded himself with anti-Iranian hardliners like John Bolton who want regime change, and he has withdrawn from the Iran Nuclear Deal—one of former President Obama’s crowning foreign policy achievements. Trump has placed strict sanctions on Iran as well, all in an effort to secure a nuclear-free Iran.

It will not succeed. Iran has worked for the past thirty years on their nuclear program, despite American and Israeli attempts to stop them. The Iran Deal was supposed to curb their nuclear program and Tehran affirmed that they would never attempt to construct a nuclear weapon. Despite Trump’s complaints, Central Intelligence Agency Director Gina Haspel said in January that Iran was complying with the nuclear deal, despite U.S. withdrawal. As Washington Post columnist George F. Will wrote, “If, however, Iran wants [nuclear] weapons as intensely as its decades of costly efforts suggest, it will get them.”

The only sure way of ensuring Iran never gets a nuclear weapon is to attack them. But that would lead to a war which will kill thousands, destabilize yet another country in the Middle East, and start another endless war; all of which Trump campaigned against and promised to end as president. As Senator Rand Paul, R-KY, said, while the Iran deal was imperfect it should have been “built on” and it was a “mistake” to withdraw from.

This brings up one last point: Venezuela. As tensions between opposition forces and the Venezuelan government continue to rise, the threat of military action by the Trump administration is only making things worse. President Trump floated the idea of invasion last year, and in a recent interview, he said it was still an option.

There’s no question that the Nicolás Maduro regime is evil and should not hold power. But the process in how they should go should be left to the Venezuelans. There is a role for the United States to play—such as sending humanitarian aid—but threats of invasion will only stiffen Maduro’s resolve. Additionally, it will allow Maduro to blame Venezuela’s problems on the United States instead of his government’s own failed socialist policies.

As I pointed out previously in the National Interest, “If the United States overthrew Maduro, the aftermath would be a long and messy occupation that would open a new military front or an even more destabilized country—as seen in the last seventeen years of U.S. intervention in the Middle East.”

So yes, Trump should be praised for his support for ending the war in Afghanistan and pursuing peace with North Korea. Yet those who commend the president must also be cautious. Trump may want to end wars in some places, but he might end up plunging our nation into new needless military adventures in other places.