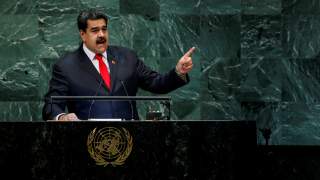 On September 4, eleven Latin American countries called on the international community for increased humanitarian aid to help deal with the ongoing Venezuelan immigrant crisis. Thousands of Venezuelan refugees are pouring into neighboring countries every day due to an economic disaster and political instability. Already, the United States has spent more than $65 million on humanitarian aid for refugees in Colombia and even sent a hospital ship to the region.

But President Donald Trump also floated the idea of a U.S. military intervention to remove Venezuelan president Nicolas Maduro from power. While the United States can do more to help, Trump’s proposed intervention will only accomplish the opposite. If we hope to help Venezuela, we must take in more refugees—but avoid the catastrophe that would come from sending our military where it doesn’t belong.

Military intervention in Venezuela would inevitably make things worse for the people who are already impoverished––the average person has lost twenty-four pounds in the last year (due to malnourishment) and 90 percent live in poverty. An intervention would not be like the 1991 invasion of Panama or the 1983 invasion of Grenada, but more like Iraq or Afghanistan, as Shannon O’Neil, senior fellow for Latin American Studies at the Council of Foreign Relations, pointed out on Bloomberg.

In order to see just how many troops it would take to invade and occupy Venezuela, look at Iraq or Afghanistan. The United States used 192,000 troops in the 2003 invasion of Iraq and required over one hundred thousand troops for occupation duty until withdrawal in 2011. And though only 1,300 troops were used in the 2001 invasion of Afghanistan, the U.S. peacekeeping mission there has had troop surges of up to one hundred thousand men, with no end to the intervention in sight. Venezuela is also geographically twice as big as Iraq, and even though it has seven million fewer people than Iraq, Venezuela’s population is still seven times bigger than Panama’s. The United States also has to face the massive Venezuelan military, who have been historically loyal to the Maduro regime.

Let’s be clear: Maduro is a terrible and ruthless dictator who has driven his country to the brink of collapse, killed and tortured protesters and constantly targets opposition lawmakers. But if the United States overthrew Maduro, the aftermath would be a long and messy occupation that would open a new military front or an even more destabilized country—as seen in the last seventeen years of U.S. intervention in the Middle East. Our forces would have to either occupy Venezuela––like what happened in Afghanistan and Iraq––or watch the country slip into chaos like Libya.

Instead, we should just focus on accepting those who are fleeing their living conditions in search of something better.

President Trump has long been critical of resettling refugees in the United States, arguing that America should not become a “migrant camp.” And, as the Cato Institute’s David Bier points out, forty-nine countries have higher rates of acceptance for refugees than the United States, including countries such as Lebanon and Jordan. These countries have high rates of violence, but that is due to their location in a war-riddled region, along with their own histories of religious conflict. The United States should allow refugees to come to America to reduce the chance of that they are radicalized or killed.

Still, immigration restrictionists balk at using government resources to help refugees. They don’t want to add to our behemoth of a welfare state, and they regularly bemoan the high cost of refugee settlement—around $79,800 per refugee, according to the Federation for American Immigration Reform. However, the cost of allowing them to seek refuge in different countries, such as Sweden or France, has the potential to be higher as they become trapped in the European welfare state. This leads to refugees floating between acting as a drain on the welfare state and trying to enter an over-regulated European labor market where, compared to native workers, they’re not competitive candidates.

If Americans don’t want their tax money to pay for resettlement costs, they should push for legislation that allows for private citizens and groups to sponsor refugees. Currently, the only country that allows this is Canada, where private sponsors, such as nonprofits and religious groups, assist refugees for the first twelve months of their resettlement. These private groups must be able to give financial, emotional and social support for refugees and help them find employment. The program has successfully integrated over three hundred thousand refugees since its start in 1978 and the children of refugees finish high school and college at higher rates than native-born citizens. Canada’s fledgling success has spurred other countries, such as Ireland and the UK, to begin developing their own programs. The United States should learn from these examples and let American citizens choose to help refugees directly.

Opponents of increased refugee numbers also tend to believe there is a link between refugees and terrorism, pointing to attacks in Europe committed by asylum seekers and refugees. However, according to the Cato Institute, out of the 2.1 million refugees who have been admitted into the United States since 1989, only fifty have committed terrorist acts—and none of them resulted in deaths on U.S soil. In reality, our nation has one of the strictest refugee security screenings in the world.

For example, of the thirteen thousand Syrian refugees who were admitted into the United States in 2016, not one has participated in an act of terrorism. In fact, the chance of being killed by a refugee in a terrorist attack are around one in three billion, per Alex Nowrasteh of the Cato Institute. And cities such as El Cajon, California—where resettled refugees make up more than 10 percent of the population—have seen their crime rates drop by between eight and 70 percent, according to coalition group the New American Economy.

However, in the end, we should note that Venezuela’s collapse is entirely due to their socialist economic policies. Unfortunately, American proponents of capitalism haven’t done much to help Venezuelans, with the exception of a single bill introduced by Rep. Carlos Curbelo (R-FL) which would only help Venezuelans who arrived in the United States prior to 2013.

By allowing more refugees, the United States can continue its proud tradition of accepting refugees that hail from countries with cruel regimes, such as Vietnam and Cuba. Those who have suffered under socialism could access the prosperity of free markets they’ve been denied for so long. After all, despite all the troubles the United States has had, we’ve experienced peace and prosperity that few Venezuelans have. Don’t they deserve the same?