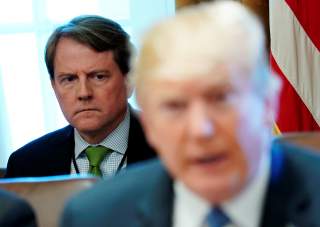 “Don McGahn is the most consequential White House Counsel in history,” Dave Warrington, Donald Trump’s lawyer in the 2016 Republican Convention fight, told me earlier this week after the president announced that McGahn’s tenure was reaching its terminus.

“Don,” says Warrington, “had the vision that Trump as President could reshape the federal judiciary by appointing conservative textualist judges in the Scalia Thomas mode.”

He also has “been the intellectual force behind the legal strategy the administration used to cut excessive government regulations that have been strangling American business and industry” and “led the administration’s efforts to reign in an overly zealous bureaucracy that has too long run this town with little oversight.”

As McGahn wraps up his time in the executive, most of the attention has been on apparent personal differences between him and the president, as well as speculation over what McGahn might or might not have told the special attorney, Robert S. Mueller III.

Hokum, say associates of McGahn, who point out that the Trump White House, under the doomed legal strategy of former Trump lawyers Ty Cobb and John Dean, failed to assert executive privilege, leaving McGahn fair game for inquisition. It wasn’t until Emmet Flood, named general of Trump’s legal battleplan in the spring, swooped in that this dynamic shifted. In this rendering, McGahn wasn’t a budding John Dowd, whistleblower to Richard Nixon, but rather an unfortunate victim of blunder by other parties.

By both conventional and Trumpian standards, McGahn’s time in office was a feat of survival. Barack Obama’s first two counsels, Greg Craig and Bob Bauer, lasted a shorter time than McGahn. McGahn has outlasted Cabinet members galore. Go back and explain to someone in the Inauguration crowd in January 2017 that McGahn’s tenure would be three times lengthier than that of Stephen K. Bannon, the architect of Trump’s electoral killing stroke.

Regardless, such talk obscures McGahn’s true legacy and what it represents. In more ways than is generally realized, this has been the Freedom Caucus presidency.

“Guys, look. This is not a discussion. This is not a debate. You have no choice but to vote for this bill,” Bannon told recalcitrant House hardliners in the Spring of 2017 as debate over the demolition of Obamacare raged. Bannon had counseled President Trump to keep a “s**t list” of the unwilling. But that was then. “The presidency we fought for, and won, is over,” Bannon told neoconservative staple The Weekly Standard later that year. “It’ll be something else,” Bannon said. “There’ll be good days and bad days.” And in a more compromised Trump presidency, a critical ally of the true believers has been the House Freedom Caucus and fellow travelers.

It may be difficult to remember now, in the more staid politics of the Obama years, but the Freedom Caucus and its allies were once the main villains of establishment Washington. Especially from 2013 to 2017, the second Obama term, Rep. Jim Jordan and his crew of political pirates were the main opponents of: immigration reform, healthcare reform, an incursion into Syria, and even, keeping the government open.

And after Trump remade the Republican Party into his own—flexible and, if anything, neo-Buchananite—the caucus’s never-compromise, Objectivist raison d’atre seemed a poor match.

But that was a misread. For one, Freedom Caucus members represent many of the districts where Trumpmania reached and remains at a fever pitch. That’s probably no coincidence. As liberal historian and author Thomas Frank documents, Trump’s rise is part of “the long turn of the American right towards populism” that dates back to even Nixon.

Trump and Trumpism is just the freshest model. Further, there are matters of disposition at play: the nation’s “working class billionaire” just gets along better with the likes of Jordan and HFC Chair Mark Meadows than he does with Speaker Paul Ryan or Mitch McConnell. He also doesn’t mind their tactics. A forced government shutdown over immigration? Sure thing, guys. In the 2016 contest, Trump and his voters always had more in common with politicians like Rand Paul, Ted Cruz and Mike Huckabee than Jeb Bush or John Kasich.

Calling for war against “the deep state” and civil servants? There is perhaps no more committed opponent of the permanent bureaucracy than the House Freedom Caucus. And on foreign policy, many of the caucus’s libertarians are sympathetic to Trump’s sporadic restrainer impulses. Libertarian-leaning Rep. Thomas Massie, R-KY, although not a member of the caucus, told The American Conservative foreign policy conference in 2016 that Trump was essentially his second choice for president after Paul. But more than any of these factors, the House Freedom Caucus and its allies, like Paul and Cruz and Meadows, give Trump something resembling a governing agenda.

I wrote this week that when he vaulted to power in fall 2016, there was “no Trump think tank and a shallow bench of populist-nationalists to choose from.” But if there is anything resembling a Trump think tank, the closest match might be the staffs of the more pragmatic members of the House Freedom Caucus.

This has already paid dividends. Trump’s top two picks for higher office, Vice President Mike Pence and Secretary of State Mike Pompeo, are supporters of the Tea Party Movement, of which the House Freedom Caucus is an outgrowth. Trump too was a provocateur on the Tea Party circuit when he was considering a presidential run in 2012.

McGahn is an ally of this contingent; his associates swim in these waters. There promise to be more Don McGahn’s in Trump’s White House, not less. McGahn’s tenure yielded rock-ribbed conservative selections for the Supreme Court, Kavanaugh and Gorsuch, and the opening salvo of what the Right hopes is a era-defining war on the permanent bureaucracy. “Don’s role in this administration’s successes in confirming judges, cutting regulations, and reigning in an out of control federal bureaucracy cannot be overstated,” says Warrington. “The results of Don’s vision and efforts will last for a generation.”

And over on the House side, a fresh plot has been hatched. Two sources familiar with the matter tell me that Jim Jordan’s run for speaker is something of a gambit. He’d of course like to prevail, but failing that, the hope is the run itself will increase the HFC’s leverage. The goal would be to install one of their own in the House’s top three positions: perhaps Mark Meadows, perhaps as Majority Leader.

And if the GOP loses the House, looking more probable by the day, the caucus is poised to be even more influential. When parties lose a chamber, the election is a purge of its moderates, not its hardliners. Barbara Comstock should be glancing at retirement real estate; Louie Gohmert isn’t going anywhere. This partly explains why Nancy Pelosi, of San Francisco, was able to return as Minority Leader after losing her speakership in the 2010 elections. Of course she has also, improbably, held onto power to this day, eight years later. And if the House does fall, impeachment hearings and even a vote are not far-fetched.

And expect few more vehement defenders of Trump than members of the House Freedom Caucus.

It Won't Be Easy for Trump to Fire Sessions